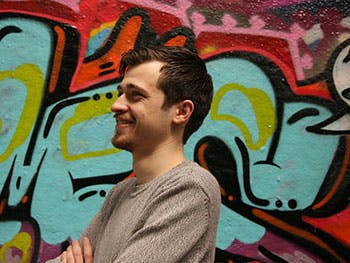 A graduate of Birmingham Conservatoire, part of Birmingham City University, is celebrating after being shortlisted in the British Composer Awards (BCA).

Created by the British Academy of Songwriters, Composers and Authors in 2003, the BCA's seek to promote the art of composition, to recognise the creative talent of composers and sound artists and to bring their music to a wider audience.

This year over 300 works were submitted for awards by over 250 composers. Nine composers were shortlisted for the very first time, including Samuel Bordoli, who graduated from Birmingham Conservatoire in 2009 with a degree in Composition.

Samuel, originally from Bedford, is nominated in the Choral category for 'Live Music Sculpture 3' – a work commissioned by the City of London Festival which explores the architectural form and structure of St Paul's Cathedral.

"I'm very excited to have been shortlisted for a British Composer Award for my work Live Music Sculpture 3.

"During my undergraduate studies at Birmingham Conservatoire, I was fortunate to have worked with Edwin Roxburgh and Joe Cutler, who were both hugely inspirational figures. I have very fond memories of being encouraged to explore musical ideas in a deeply liberating environment," said 27 year-old Samuel, the youngest composer shortlisted for this year's awards.

Three composers are shortlisted for two awards this year, including Sir Harrison Birtwistle, who is to hold a public masterclass at Birmingham Conservatoire on Friday 28 November.

The winners of this year's BCA's will be unveiled at a ceremony at Goldsmiths' Hall in London on Tuesday 2 December, which will be broadcast on BBC Radio 3's Hear and Now at 10pm on Saturday 6 December.