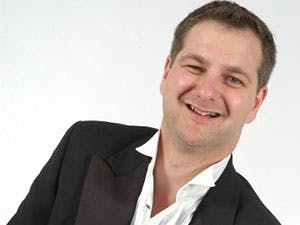 Paul Bambrough, described by former Secretary for State Education Ruth Kelly as “one of the most inspiring teachers of his generation”, has joined Birmingham Conservatoire as Associate Principal (Director of Performance).

A versatile musician who balances a busy performance schedule with teaching and conducting, Paul has worked with some of the world’s most distinguished singers including The Three Tenors, Sir Willard White and Dame Kiri te Kanawa.

As a tenor, Paul has appeared at most of the country’s leading concert venues and cathedrals. His extensive repertoire of oratorio works have included performances of Bach’s ‘Magnificat’, Mozart’s ‘Requiem’ and Puccini’s ‘Messe di Gloria’.

Paul has gained a national reputation for his work in Post-16 music education. As Director of Music at the Sixth Form College Farnborough, his dedication to excellence led to the largest A Level music department in the country, comprising of 500 students engaged on courses and enrichment activities. Former Secretary for State Education Michael Gove recognised Paul’s achievements as a “prestigious contribution to music education in the UK”.

Paul’s role at Birmingham Conservatoire, part of Birmingham City University, will be to lead the performance area, working with colleagues to develop an already extensive programme of events.

Paul said: "I am delighted to be joining Birmingham Conservatoire and Birmingham City University.  With its international reputation for outstanding teaching and performance it is a great privilege to have been invited to join such a vibrant and talented community.

“I am much looking forward to building on its impressive record of excellence and working with its distinguished staff and students.  With a brand new, world class building opening in 2017, there has never been a more exciting time to join Birmingham Conservatoire, either as a member of staff or as a student!"

Benjamin has worked in orchestral management since 2001 – firstly with City of London Sinfonia and English Sinfonia and then for five years with the City of Birmingham Symphony Orchestra (CBSO).