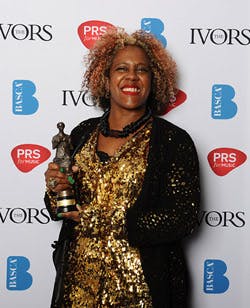 Errollyn Wallen, a composer and visiting tutor at Birmingham Conservatoire, is celebrating after winning The Ivors Classical Music Award at this year’s Ivor Novello Awards, held last week in London.

The 58th Ivor Novello Awards took place on Thursday 16 May at London’s Grosvenor House Hotel and also saw Emeli Sande take home two awards for her hit single ‘Next to Me’.

Presented by BASCA and judged by the writing community, The Ivors celebrate and reward excellence in songwriting and composing, honouring individuals and recognising their contribution to British music.

On receiving her award, Errollyn said: “I am thrilled and deeply honoured to receive this award on behalf of composers everywhere.”

Born in Belize, Errollyn Wallen gave up her training at the Dance Theatre of Harlem, New York to study composition at the universities of London and Cambridge. She founded her own Ensemble X, and its motto ’We don’t break down barriers in music…we don’t see any’, reflects her genuine, free-spirited approach and eclectic musicianship. Errollyn has been commissioned by outstanding music institutions from the BBC to the Royal Opera House and performed her songs internationally.

As well as teaching at Birmingham Conservatoire, part of Birmingham City University, Errollyn’s current projects include a collaboration with theatre and opera director David Pountney and a new work for Welsh National Opera to be premiered in 2014.

Errollyn Wallen was awarded an MBE for her services to music in the Queen’s birthday honours list in June 2007.

View the full list of winners at this year’s awards.