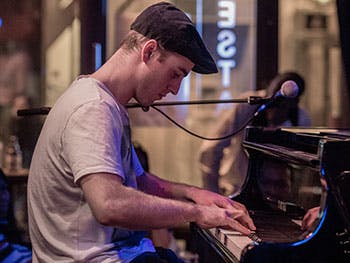 Launched in 2014, the BBC Young Musician Jazz Award runs alongside the established classical music format and aims to showcase another group of exceptional young musicians to audiences across the UK. The Jazz Award consists of two audition stages and the final, which will be broadcast on BBC Four.

Born in 1994, Elliott grew up in a musical family in Solihull, and from a young age he was exposed to different types of music – particularly blues – becoming intrigued by the music of Ray Charles. There was always a piano in the household, and from five years old, Elliott began experimenting with the instrument after showing a keen interest when hearing his mother and grandma playing.

In 2012, Elliott gained a place studying jazz with the Junior Conservatoire at Birmingham Conservatoire, which provides specialist musical tuition for talented young musicians. A year later, he began studying on the Conservatoire’s undergraduate jazz course – BMus (Honours) Jazz – and is now in his final year of study.

In his third year, Elliott was offered a placement semester studying at the Prestigious Paris Conservatoire, where he played many concerts and sessions around the French capital. He also went to Germany to study piano with a renowned pianist Pablo Held.

“Elliot Sansom is a great success story for the jazz scene in Birmingham. He has come through from school in Dorridge to the Midland Youth Jazz Orchestra and our Junior Conservatoire, on to being a leading student at Birmingham Conservatoire and now being named a jazz finalist by the BBC. He will surely be taking a major place on the professional music scene any time soon.

“Elliot Sansom is a major jazz talent in the UK today. His improvising is always incredibly engaging, warm and interactive and he always displays a fantastic panoply of musical ideas.”

Elliott now joins the four other finalists in the final, which will take place on Saturday 12 March 2016 in the Dora Stoutzker Hall, Royal Welsh College of Music and Drama, Cardiff. In the final the competitors will be accompanied by the Gwilym Simcock Trio, who will once again be working with and mentoring the finalists as they rehearse.

“I'm really looking forward to working with the exciting young musicians who've made it to the final. Last time around it was an absolute pleasure to develop the music with the finalists – and every single one of them not only worked really hard during the mentoring process, but also played wonderfully on the night. I know this time around will be just as great and I can't wait to hear them all play!”

Elliott is gaining recognition with his own groups and one of his main writing projects is with his Trio, with Ben Muirhead (double bass) and Billy Weir (drums). He has also collaborated with many musicians throughout the Birmingham area, including the Birmingham Conservatoire Jazz Ensemble, the Tom Niblog Quartet and the Anthony Jones Big Band.

I'm thrilled to be selected as one of the top five candidates for the BBC Young Musician Jazz Award. I'm really looking forward to playing with the Gwilym Simcock trio and having fun performing the music that I love.

“I have had lots of support and help at this stage of my development from both my family, friends, and also the Birmingham Conservatoire, where I have been given many great opportunities.”

Musically, Elliott is particularly interested in the harmonic and rhythmic language shared in both jazz and classical music, and this is something he is exploring and studying in his playing. Alongside performing, Elliott is currently collaborating with his older brother in setting up a recording studio space that will contribute to his professional development.