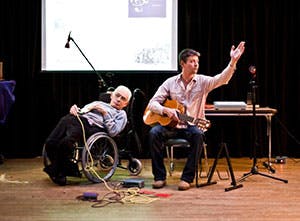 A group of music experts from Birmingham Conservatoire are helping severely disabled people from across the city to make music.

Soundbeam is an award-winning ultrasonic 'touch free' instrument which uses sensor technology to translate body movement into music and sound in almost any style and almost any instrument, enabling the most profoundly disabled and 'unreachable' people to create music.

Funded by the Arts Council England Grants for the Arts, and using music technology and acoustic instruments with a team of expert musicians from Birmingham Conservatoire, a range of workshops have already taken place and further sessions are planned for this year.

Soundbeam can be played with a single finger or even the mouth to allow participants to tap into their sometimes previously unrecognised potential and it is having a massive impact in transforming the lives of disabled people living in Birmingham.

Birmingham Conservatoire academic and project director Liz Johnson explains: "Soundbeam is an innovative way of helping people living with disabilities to have positive experiences of music and arts. It has become clear that live music and arts activities and involvement can have a huge benefit to people's lives. This unique, creative and expressive medium is widely recognised as 'must-have' technology.

"We have established links with Heartlands Hospital where we've worked with therapeutic staff to identify patients who are at risk of being isolated on their return from hospital. And the future potential for the project is endless.

"We have already worked with people affected by muscular dystrophy, cerebral palsy, serious head injuries and other similarly limiting disabilities. We are also working with therapists at Moor Green Brain Rehabilitation Unit who have referred project participants recovering from strokes."

Inspired by three friends with severe disabilities who had the vision for the project and the positive impact it could have on those who find it difficult to access music-making, the 3DOM project continues to provide a creative outlet in which participants can work at the highest musical level.

Mansoor Hussein is one of the regular users of Soundbeam. He has composed several pieces which incorporate Soundbeam, iPads and the whole 3DOM ensemble, including 'Crazy'.

He said: "Soundbeam has given me the opportunity to actually play instruments that I probably in reality wouldn't ever get to play because of my physical impairments, so that's the amazing aspect of it."

More information on the Soundbeam project