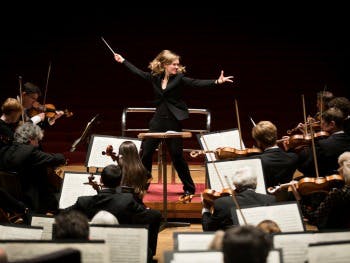 The official opening of the new £57 million Birmingham Conservatoire will be marked by a Royal Gala concert conducted by City of Birmingham Symphony Orchestra’s (CBSO) Music Director, Mirga Gražinytė-Tyla.

The announcement by Professor Julian Lloyd Webber, Principal, Birmingham Conservatoire, was made on Thursday 27 April as the CBSO launched the programme for its 2017/18 season.

Boasting five public performance spaces – including a 500-seat concert hall and Birmingham’s only permanent jazz space – the new teaching and performance facility is the first complete new build conservatoire in the UK since 1987 and the first of its kind in the digital age.

Part of Birmingham City University, the new Conservatoire is currently under construction in the Eastside region of Birmingham, on the University’s City Centre Campus.

This will be a fantastic opportunity for our students to play under Mirga Gražinytė-Tyla – one of the finest conductors of her generation – and a treat for music lovers of the city to see their new Conservatoire with our full orchestra in all its glory.
Professor Julian Lloyd Webber

“The unique concert also reaffirms our ongoing close relationship with one of the world’s best orchestras and a sign of great collaborations to come in the future.”