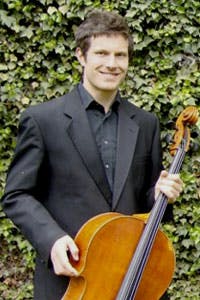 A cello student at Birmingham Conservatoire has been awarded a recording sponsorship by the Delius Society. The funding, worth £1,500, will enable cellist Philip Handy to record a CD including the works of well-known Yorkshire-born composer Frederick Delius.

In March 2011, Philip Handy gave a recital of English music with Robert Markham at London’s Steinway Hall, for the Delius Society and friends. Overwhelmed by his 'charismatic performances' and 'dedication to British Music', the Delius Society decided to sponsor Philip to record a CD of British music, including, of course, Delius. The recording will take place in September for release in October.

As a scholarship student and Junior Fellow at Birmingham Conservatoire (part of Birmingham City University), Philip has won the Strings Prize, the Rollason Award, second prize in the Ludlow Philharmonic competition, first prize in the Sylvia Cleaver Chamber Music Competition, first Prize in the Symphony Hall Recital Competition and, most recently, received the Attwood Richards Prize. He was also runner-up in the 2010 Delius Prize, where he first made a significant impression on members of the Delius Society.

During his time in Birmingham, Philip has given over 15 solo concerto performances with various orchestras across the UK, including works by Haydn, Dvorák, Shostakovich, Tchaikovsky and Elgar. Philip will again perform with Dr Robert Markham (Head of Accompaniment at Birmingham Conservatoire) in a series of recitals during autumn 2011.

Frederick Delius was born in Bradford, Yorkshire on 29 January 1862, so 2012 marks the 150th anniversary of his birth. To celebrate, the Delius Society is supporting selected projects, such as Philip’s CD, and also encouraging and publicising performances of his music – particularly works which are rarely heard.

Birmingham Conservatoire itself is contributing to Delius’ anniversary with a disc of part-songs by Frederic Delius and John Ireland, recorded by the Conservatoire’s critically-acclaimed Chamber Choir. The CD is being recorded in July 2011 in St Alban’s, Highgate, Birmingham for the SOMM label. Supported by the Delius Society and Ireland Trusts, the CD – to be released to coincide with the Delius and Ireland anniversaries in 2012 – will be the first recorded presentation of John Ireland's part-songs as a body of repertoire and will bring Frederick Delius’ part-songs back into the catalogue.