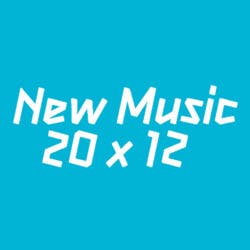 Composers at Birmingham Conservatoire are celebrating after a music series that they produced new works for has received a Royal Philharmonic Society (RPS) Award in the category of ‘Concert Series and Festivals’.

Composers at Birmingham Conservatoire, part of Birmingham City University, contributed four new pieces out of a total of 20 works commissioned for the New Music 20x12 series, which formed part of the London 2012 Cultural Olympiad.

The 20 works commissioned for New Music 20x12 each last 12 minutes and cover a wide range of genres, reflecting the diversity and richness of musical life in the UK – from contemporary classical, folk and opera in Scotland and Northern Ireland to bell ringing, beatboxing and jazz in England and Wales.

A fifth of the compositions for the New Music 20x12 series were provided by Birmingham Conservatoire’s composition department – the largest representation from any of the nine UK conservatoires.

Joe Cutler, Head of Composition at Birmingham Conservatoire, said: “The Royal Philharmonic Award is wonderful recognition for a really daring initiative that placed contemporary music centre stage within the Cultural Olympiad. We're really delighted that four Conservatoire-based composers were a central part of this. I think it shows that Birmingham is really becoming the UK's artistic hothouse. Special thanks too to our friends Stan's Cafe Theatre for bringing it all together.”

Set up in 1989 to celebrate the outstanding musical achievements of both young and established British and International musicians, the RPS Music Awards are the highest recognition for live classical music-making in the UK.

Michael Wolters, Deputy Head of Composition at Birmingham Conservatoire, said: “I'm extremely happy that a series of contemporary music won this award. It was great being part of it. I'm especially proud of the fact that four staff composers from Birmingham Conservatoire were involved in it. That's more than from any other institution in the UK.

The New Music 20x12 commissions were performed at 75 different venues all over the UK and were chosen by a judging panel consisting of composer Judith Weir, journalist Kevin LeGendre, composer and performer Errollyn Wallen MBE, producer Joana Seguro and DJ and musician Rita Ray.

Check out the full list of winners at this year’s RPS awards.