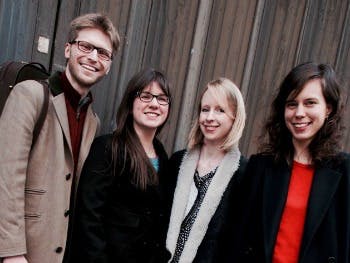 Birmingham Conservatoire is delighted to announce the appointment of the Gildas String Quartet as their new Junior Fellows from September 2015.

The Quartet was chosen from a strong field for the superb intensity and conviction of their playing, for their excellent teaching skills and rapport with the students they worked with, and for the creativity and energy they showed in imagining their role in the Conservatoire.

They will play a vital role in continuing to develop the burgeoning Chamber Music scene at the Conservatoire, so essential in helping students to acquire the confidence and self-sufficiency needed for the profession.

Praised for its 'refreshing approach' and 'exciting precision', the Gildas Quartet is fast establishing itself as one of the most exciting young ensembles to emerge in recent years.

As Park Lane Group Young Artists and winners of a Tunnell Trust Concert Award, the quartet has enjoyed an exciting year which included Purcell Room and Wigmore Hall debuts and a live performance on BBC Radio 3's In Tune as studio guests with Sean Rafferty.

The Gildas Quartet has performed widely across both the UK and Europe including at the West Cork Chamber Music Festival, the Two Moors Festival, Altenberger Kultursommer festival and Pallazzo Ricci, Montepulciano.

Passionate performers of all repertoire from old to new, the quartet has recently had the privilege of working both with Colin Matthews and with Sir Harrison Birtwistle on performing the composers' most recent string quartets at the Southbank Centre and the Forge, Camden.

The quartet has also collaborated with the Medici Quartet in performing Sir John Tavener's 'Towards Silence' and performed live via video link in New York's Carnegie Hall for the American Composers' Orchestra, giving the world the premiere of Ray Lustig's 'Latency Canons' which received a glowing 4-star review in the New York Times.

Since its formation, the quartet has worked closely with violinist and conductor GÃ¡bor TakÃ¡cs-Nagy, studying both privately and in pubilc masterclasses, including for the Friends of the Verbier Festival and at the Geneva Conservatoire.

They were invited as the only UK-based quartet to participate in an inspirational week of masterclasses on the quartets of Bela BartÃ²k, led by GÃ¡bor TakÃ¡cs and Sandor DaviÄ of the original Bartok Quartet.

The Gildas Quartet is enjoying a busy Winter season including recitals at the Two Moors Festival, the Southbank Centre, 'Birtwistle in Birmingham' festival and an extensive tour of Scotland, from Edinburgh University to Orkney.

Alongside performing engagements, the quartet enjoys teaching, from masterclasses to workshops and community projects, chamber music collaborations, and open rehearsals.

Forthcoming engagements in 2015 include a performance of Haydn's Seven Last Words at Hampton Court Palace this Easter, recitals at the Conway Hall and Purcell Room, and a return to the Cheltenham Festival this Summer.

We are thrilled to welcome the Gildas String Quartet as our new Junior Fellows.  Their appointment from such a strong field coupled with the Klee Quartet’s recent spectacular success at the Intercollegiate String Quartet Competition clearly demonstrate that Birmingham Conservatoire is rapidly becoming the place of choice for world class Chamber Music provision.