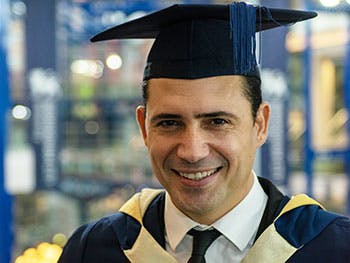 Graduates Dhafer L’Abidine, Michael Adams and Danielle Pinnock have received prestigious Alumni of the Year awards from Birmingham City University, in recognition of their career success and achievements.

Dhafer, Michael and Danielle were presented with their awards by University Chancellor Sir Lenny Henry during graduation ceremonies held at Birmingham’s Symphony Hall on Thursday 10 and Friday 11 January, alongside thousands of graduating students set to embark on their future careers.

Acting graduates Dhafer and Danielle were recognised for ‘Excellence in the Arts’, whilst health graduate Michael was recognised in the ‘Community Engagement and Leadership’ category.

Dhafer has enjoyed significant success as an actor since graduating in 2002. He went on to secure roles in numerous British TV series including Casualty, Spooks and Wire in the Blood, as well as hit French series Spiral and American programmes Transporter and The Looming Tower. He has also appeared in feature films including Children of Men, Centurion and Sex and the City 2.

Television and film roles in Dhafer’s native Tunisia, as well as in countries including Egypt and Lebanon, have secured him a number of Best Actor awards. He has also seen success as a TV presenter, hosting Prince of Poets – a prestigious talent show which attracted over 20 million viewers per episode – and the Dubai-based version of worldwide gameshow hit The Cube.

Commenting on his time studying at Birmingham City University, Dhafer said: “I'm so thrilled to be honoured as an Alumni of the Year.

I had a brilliant time at the University and what I remember most is the quality of the teaching.

Danielle’s one-woman stage show started life as her dissertation project whilst studying at Birmingham City University. Based on a series of interviews with women in the UK and USA, Body/Courage set out to raise awareness of the varying perceptions of body image. Following graduation, Danielle entered her play into the 2013 Strawberry One Act Theatre Festival in America, landing her a ‘Best Actress’ award as well as nominations for ‘Best Director’ and ‘Best Play’. She then took it to the stage in Chicago where it won a TimeOut Theatre Award.

In 2016, Danielle decided to challenge herself artistically by moving to Los Angeles and auditioning for TV roles. She secured her first role in the hit US drama This is Us, followed by parts in Scandal and Get Shorty. Danielle currently plays the recurring role of Sheldon’s maths teacher Ms Evelyn Ingram in Young Sheldon, the prequel to hit comedy The Big Bang Theory, shown on E4 in the UK. 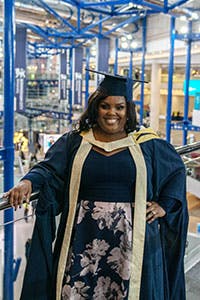 “Studying in Birmingham changed my life and I am forever grateful to all of the professors who accepted me and gave me the courage and skills to pursue acting full-time,” said Danielle.

“I now have a solid work ethic and training that I will keep with me for the rest of my life. It is my greatest hope to create space for actresses of size in film and television. Melissa McCarthy, Chrissy Metz, Amber Riley and so many more have paved the road for actresses like myself.

"I hope to break some of the barriers Hollywood has created for plus-size actresses. One day, I hope to change the narrative of what roles we can be seen for. I want to create more opportunities for women like me.”

Having worked as a nurse in Birmingham, and then as a lecturer in nursing at Birmingham City University, Michael Adams is now supporting the profession as Regional Director of the Royal College of Nursing (RCN) in the West Midlands.

Michael trained as a nurse at the Queen Elizabeth Hospital Birmingham between 1992 and 1995 and worked for several years at Selly Oak Hospital in general and respiratory medicine. He then returned to education, undertaking a degree in Health Policy and Management at Birmingham City University.

Michael later became Associate Head of School for Nursing and Midwifery at the University and was heavily involved in managing the changes affecting nursing students and staff in recent years – experience he has taken into his new role with the RCN, where he represents the interests of 40,000 members across the West Midlands Region. 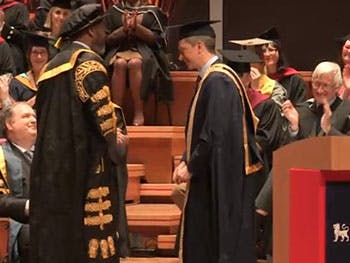 “Becoming a nurse was easily one of the best decisions I have ever made,” said Michael.

“I have enjoyed my career thoroughly so far thanks to the fulfilment that being a nurse offers – whether it's caring for people in practice, supporting students in training or showing support and compassion to colleagues or family members.”

“Birmingham City University has been very good to me, it has given me a lot of opportunities and it is an institution I greatly admire, so to be recognised as an Alumni of the Year was a very nice surprise, and a privilege.”

See how Dhafer, Danielle and Michael celebrated receiving their Alumni of the Year awards on social media.