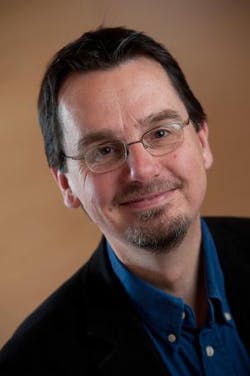 An education leader at Birmingham City University has been recognised for his outstanding contribution to excellence in university teaching.

Professor David Roberts, currently the Executive Dean of Performance, Media and English at Birmingham City University, has been awarded a National Teaching Fellowship.

David’s success was announced today by the Higher Education Academy. The accolade is recognised as the most prestigious award for excellence in higher education teaching and support for learning.

“I’m delighted to join a fellowship of people who have made deep and varied contributions to university teaching,” said David, who has been head of Birmingham City University’s School of English before taking up a role to lead his faculty.

“Receiving this award will make me try even harder to live up to it, and I hope it will be seen as a mark of the great work that goes on in our School of English, where I continue to explore with students the joys of good reading and writing.

“For every National Teaching Fellow there are ten exceptional tutors who have never even thought of applying – so my aim now is to encourage colleagues across my University to put themselves forward.”

David passionately believes in the capacity of literary studies to transform students’ understanding of the world – and the need to teach demanding disciplines of “thought, research and expression”.

David has taught at Birmingham City University for 11 years following appointments at universities in the UK and Japan. He completed his first degree at Bristol University and his DPhil at Worcester College Oxford. He has been a Head of School for ten years and combines his current post as Executive Dean of Faculty with a strong commitment to teaching and research.

His teaching focuses on renaissance and restoration drama – and he is particularly interested in using the resources of Early English Books Online to open up the Early Modern period to students of drama.

His 2010 Cambridge University Press study of the actor Thomas Betterton was short-listed for the Theatre Library Association’s George Freedley Prize, and his edition of Betterton’s book and picture catalogue is due out this year from the Society for Theatre Research.

Current projects include a new introduction to Restoration Drama for Cambridge University Press. He has also worked on three volumes in the Oxford World’s Classics series and written two textbooks for Kogan Page.

Occasionally he writes programme essays for the Royal Opera House and fiction for no one in particular. He also serves as Orator at Birmingham City University.