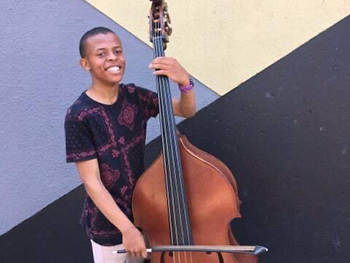 ARCO Double Bass student Njabulo Nxumalo has been selected to perform alongside the Randburg Symphony Orchestra as part of their Youth Concert in Johannesburg.

Njabulo successfully auditioned to perform the Capuzzi Concerto in D major with the Orchestra at the concert, which will be performed at the Roodepoort Theatre in Johannesburg on Saturday 6 June.

Njabulo, aged 19, has been studying through the ARCO Project since its inception in 2015, initially learning violin and then Double Bass online with Conservatoire graduate Aisling Reilly. He only recently started to play the Double Bass after a consignment of instruments was shipped over to Soweto from Birmingham in 2018, containing an instrument made by RBC’s International Chair in Double Bass, Thomas Martin.

The concert is put together by the Randburg Symphony Orchestra to give aspiring musicians an opportunity to play with the Orchestra and perform in a public concert.

The Orchestra is a community orchestra, comprising people who give their time to play for the love of music.

Njabulo has previously travelled to the Royal Birmingham Conservatoire to perform at the opening concert of the Cecil Aronowitz International Viola Competition in 2017, which saw him and two other ARCO Project students enjoy a multitude of events during an exchange visit to the UK.