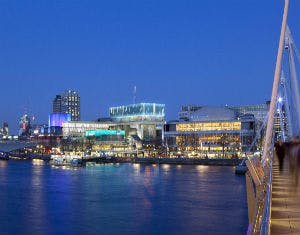 FCB Studios will now work alongside the University to develop the plans for the new £40 million purpose-built Conservatoire.

Vice-Chancellor Professor Cliff Allan said: “We are delighted to be working with Feilden Clegg Bradley Studios on this exciting new building which will further enhance the University’s current estates portfolio.

“During its long history our world renowned Birmingham Conservatoire has earned an international reputation for the excellence of its music teaching, research and performances. We will continue to provide the finest music education in our present location until the new building is completed and we are confident that it will provide us with a glorious opportunity to build on our proud history and develop world-class music facilities for future generations.”

FCB Studios will bring together their team of higher education and performance arts experts who have an established track record of working together on other significant performance arts projects including; the Queen Elizabeth Hall at the South Bank Centre, the Victorian Theatre at Alexandra Palace and Brighton Dome.

The wider design team for the project has also now been selected, which includes Hoare Lea (Mechanical, Electrical and Public Health Company), Faithful + Gould for Cost Consultancy and WYG who will act as the Structural and Civil Engineers.

Clive Higham, Partner at Hoare Lea, said: “We are absolutely delighted at the opportunity of continuing our association with Birmingham City University. The idea of working on a landmark building, setting the tone for Birmingham and its learning quarter, is very exciting for us.”

Anthony Fuller, Director at WYG, said: “The Birmingham Conservatoire is famous across the world for its state-of-the-art music facilities. The decision to relocate the building to the city’s learning quarter is a fantastic opportunity for WYG to redesign the structure of the building so that it reflects the unique and contemporary education provided by Birmingham City University. We are extremely proud to be appointed as structural engineers involved in yet another important project for the University and are confident we can deliver a brilliant new venue for current and future students to enjoy.”

Paul Doherty, Head of Operations (Midlands) at Faithful+Gould, said: “The Birmingham Conservatoire project is a fantastic win for our Birmingham business, helping us to maintain our record of delivering large, complex and high profile projects in Birmingham. We have been working on projects in Birmingham for over 75 years and have delivered a wide variety of projects in the city that have helped shape the Birmingham landscape. We look forward to working with Birmingham City University and the team to deliver a building of cultural significance.”

The new Conservatoire will be a unique contemporary building providing state of the art facilities for students, incorporating two major performance spaces including a fine new concert hall and public performance, private rehearsal and practice rooms, recording and technology studios in addition to providing teaching spaces for musicians from a variety of disciplines.

Building work will begin in the summer of 2015 and is scheduled for completion in summer 2017. It will be situated alongside Millennium Point, adjacent to Jennens Road in Eastside and in the heart of the City’s learning quarter, which is already home to Birmingham City University’s City Centre Campus, the ThinkTank Museum, and the Birmingham Ormiston Academy.