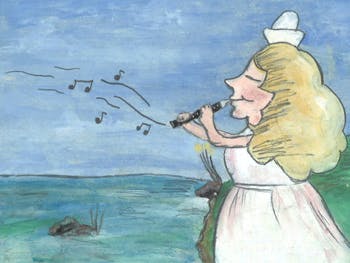 ‘The Shepherdess’ will receive its premiere on Sunday 18 February as part of the second Birmingham International Recorder and Early Music Festival which runs from 15-18 February at the Royal Birmingham Conservatoire.

The story of ‘The Shepherdess’ has been set to music with narration by Conservatoire composer Cam Athanasiades and additional music by Soul Zisso.  Paintings and animations by Birmingham City University Visual Communications student Daniella Allen, based on the originals in the book, have also been created as part of the project.

‘The Shepherdess’ will be performed at 3pm on the final day of the Festival by 70 young players from across the UK and marks the 30th anniversary of the death of the recorder player and early music scholar Walter Bergmann. It was to Bergmann that the original, unpublished, book was dedicated.

Walter Bergmann (1902-1988) escaped to England from Germany in 1939 and spent the war years interned on the Isle of Man. His associations with composer Sir Michael Tippett and the countertenor Alfred Deller led to a revival of the countertenor voice. He was a key figure in the Society of Recorder Players encouraging playing by amateurs, and his role at Schott’s publishers enabled the publication of arrangements and new editions for recorder.  He is remembered not only as a fine music editor and scholar, but also for his tireless and generous support of young recorder players.

The concert will also feature Bergmann’s final (unpublished) recorder and piano quartet arrangement of Mozart’s ‘Piano Sonata for Four-Hands K381’, plus his solo recorder sonatas and other music for children.

The Festival, which takes place over four days, features over 30 different events and includes headline performances by Birmingham’s own folk-world outfit the Bonfire Radicals, synth-Bach with The Art of Moog, marking the 50th anniversary of Wendy Carlos’s seminal album Switched-on Bach, and  Baroque music and dance from the London Handel Orchestra in Baroque Rebellion.

As well as concerts, the Festival includes workshops, masterclasses, an Early Music market and demonstrations such as Tim Cranmore Makes a Recorder from a Carrot – sure to be one of the tastier sessions.

Get more info and book.