Alumni in the world of theatre and opera 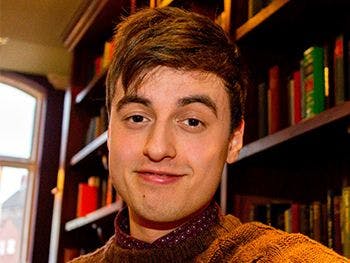 Joel Hall, who graduated from RBC with an MA in Composition in 2018, has been confirmed as the composer of a community musical to be staged at the Lichfield Garrick Theatre in 2022. Joel will also offer a masterclass about the basics of composition, sharing how to start song writing and create music for characters with attendees.

Alongside this position, Joel will also be working with Coventry’s Belgrade Theatre for the show ‘The Last Vampire’, which will feature in Coventry’s City of Culture 2021 celebrations.

“All these jobs link directly back to the Conservatoire and the people I met there,” Joel said.

Lichfield Garrick’s associate director Jonny McClean told Lichfield Live: “It’s incredibly exciting to be working with a composer of Joel’s calibre. He has a fantastic catalogue of work, and I can’t wait to get working with him and the composing group.”

You can book on to Joel’s masterclass – Musical Composition – Writing Music for a Musical – Friday 2 July.

Performing arts hub the Garage Theatre in Norwich has announced four new patrons, one of whom is alumna Lady Anwen Hurt, who graduated from RBC and worked as an actor and producer in theatre for a number of years.

Lady Hurt, who is artistic director of Holt Festival and Pro-Chancellor of NUA, told the Eastern Daily Press: “Performing arts develop the confidence of any age group, but I’m especially mindful of how a feeling of belonging can benefit the health and well-being of disadvantaged young people and give them the life skills to find their own way in the world.”.

RBC vocal and operatic studies graduate Claire Barnett-Jones stepped up in her role as official reserve singer for BBC Cardiff Singer of the World, after competitor Álfheiður Erla Guðmundsdottir withdrew from the televised showcase. Claire’s performance of ‘No more, I’ll hear no more…Hence, Iris, away’ from Semele by Handel is available to watch on iPlayer now.