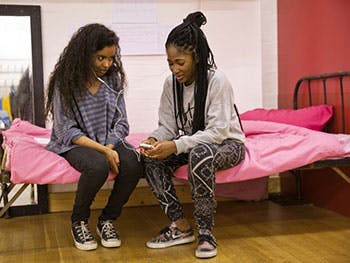 Charlene James took home the award Best New Play for her play Cuttin’ It at the UK Theatre Awards ceremony. The awards honour outstanding achievement in performing, producing and management. Charlene was nominated alongside two others for the award.

“Being recognised for your work always feels like an achievement. But I hope it's started more conversations and raised awareness about female genital mutilation.” Says Charlene

Originally written for the radio, Cuttin’ It follows Somalia-born schoolgirls Muna and Iqra as they discover their families share a painful secret. The play explores the issue of female genital mutilation (FGM) in Britain and the price that some girls pay to become a woman. A reality that is unfortunately still common in some areas today.

"I have a couple commissions I'm working on at the moment. I just enjoy exploring stories that I have a passion to tell. It's always good to be involved with theatre in Birmingham too, as it's my home town and the place I grew up watching theatre.”

The ceremony was held in London on the 9th October 2016, the event included a number of guest presenters throughout the evening. There were 15 categories in total which cover such awards as Best Touring Production, Best Design and Achievement in Marketing to name a few. Charlene was nominated alongside two others for the award.

Congratulations to Charlene on her award win, we look forward to future projects!