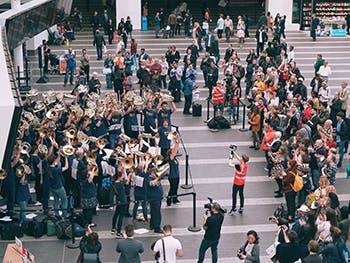 French Horn superstar Sarah Willis recently made her first official visit as our International Chair in Brass at Birmingham City University’s Royal Birmingham Conservatoire. While she was here we arranged a French Horn flash mob of Birmingham New Street train station to entertain commuters on their journey home!

Horn players of all ages from around the West Midlands were brought together by our Learning and Participation team to perform together in the UK’s busiest station outside London, as part of a two-day programme led by internationally renowned musician Sarah Willis to celebrate the ‘endangered’ instrument.

The ensemble played ‘Hunting Chorus’ from Der Freischütz (Weber), ‘Yesterday’ by the Beatles and the ‘Liberty Bell March’ (Monty Python, especially arranged by Joshua Davis), all conducted by our Principal Julian Lloyd Webber, in the middle of the UK’s busiest train station outside London.

A film of the performance with the hashtag #BellsUpBrum – shared on Sarah’s hugely popular YouTube channel and RBC’s Facebook page – has been watched by thousands of fans already!

Sarah was announced as the first International Chair of Brass Royal Birmingham Conservatoire in September 2018. During her recent visit she delivered a series of one-to-one and group masterclasses with students, and led a free public concert featuring massed horns in the Conservatoire’s Bradshaw Hall.

As well as being a member of the world-renowned Berlin Philharmonic Orchestra – the first woman to join the brass section as appointed by our President and former City of Birmingham Symphony Orchestra Artistic Director, Sir Simon Rattle – Sarah is an international soloist and chamber musician with a passionate commitment to music education and making a love of classical music accessible to all. 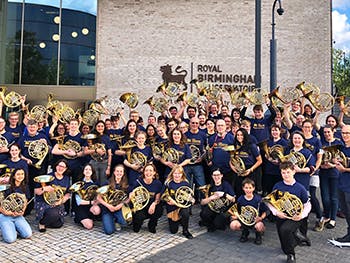 The horn player also presents the TV programme ‘Sarah’s Music’ for German public broadcaster Deutsche Welle and her live-streamed ‘Horn Hangouts’ have been viewed across the world, reaching people who may not have easy access to live concerts or teachers.

This is event is partly to spread the “gospel” of the French Horn, one of classical music’s most endangered instruments. Sarah is arguably the highest profile ambassador for the instrument in the world and we are thrilled to be surprising commuters at Birmingham New Street Station to showcase her work with the significant international hub of excellence for brass – including French horn – that is the Royal Birmingham Conservatoire.”
Amos Miller, Head of Brass at Royal Birmingham Conservatoire