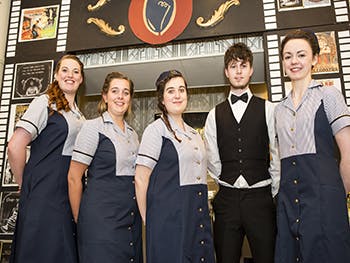 The UK’s oldest working cinema, The Electric in Birmingham, will be transporting moviegoers back to its Edwardian era origins as part of an immersive cinematic experience this week.

1910s at The Electric will take place on Wednesday 27 and Thursday 28 April and has been devised by final year Stage Management students from Birmingham School of Acting, part of Birmingham City University.

Over the two days they will be screening hour blocks of classic silent films from 10.15am. During intermissions there will be musical accompaniment in the form of a pianist, fun period games to compete in and confectionery from the 1910s available to enjoy during the film, along with a complimentary programme.

Guests will be welcomed by ushers dressed in traditional costumes, also created by the Stage Management undergraduates.

Zoe Carrico is the Student Project Manager for 1910s at The Electric. She said:

“As part of our Stage Management course, we were tasked with finding a historic location in Birmingham that we could transform to highlight its history. One group was looking into old cinemas in the area and we researched in to how The Electric was refurbished in 2004 to its 1930s Art Deco incarnation, as no plans of the earlier design survived, so we really liked the idea of taking it back even further.

As well as the films, we have built old fashioned, period-style games that the audience can enjoy during intervals between screenings. We also have a peephole picture board where people can have a photo taken in an Edwardian cinema scenario and visitors can enjoy old fashioned sweets. There will also be the opportunity to meet the creative team involved throughout the two days.

Opened in Station Street, Birmingham in December 1909, The Electric has had a varied career as a motion picture house, including being used as a news theatre, and, for much of the 1970s, a pornographic cinema. Today, The Electric is known for its eclectic programmes of mainstream, independent, foreign and classic films, as well as hosting various cultural events throughout the year.

“1910s at The Electric promises to be an engaging cinematic event that will transport our customers back to the defining era of film and highlight the long history of our venue.

“The students from Birmingham City University have worked extremely hard to bring their creative ideas to reality and it will be great to see visitors enjoy and interact with what they have created.”

Birmingham itself has a long and distinguished history of engagement with the film industry that began in 1862, when Alexander Parkes discovered celluloid in the city’s Jewellery Quarter. More recently, Oscar Deutsch, born in the Birmingham suburb of Balsall Heath, founded the Odeon cinema chain in 1928 – with local architect Harry Weedon pioneering their iconic Art Deco designs. The name Odeon is still colloquially understood as ‘Oscar Deutsch Entertains Our Nation.’

1910s at The Electric has been run in conjunction with Philip Holyman and Gareth Nicholls, Co-Directors of Walsall-based theatre company Little Earthquake and Visiting Lecturers at Birmingham School of Acting.

“I have enjoyed working on this project because it gave us the opportunity to work with a well-respected company external to our university training. I have loved guiding my fellow students through the process; seeing it all come together as a team has been really rewarding.”