Your Love Lifts Me Up 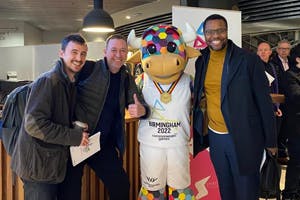 Royal Birmingham Conservatoire recently teamed up with community partners to launch the British Sign Language Community Chorus song ‘Your Love Lifts Me Up’ as part of the Birmingham 2022 Festival.

‘Your Love Lifts Me Up’ was recorded at the studios at RBC and features students, staff and alumni in the orchestra. Postgraduate singer Gabriella Liandu performs on lead vocals.

The song celebrates the importance of British Sign Language (BSL) as part of the festival, and the project partnered with Deaf Explorer and deaf artists to create a verse.

Children from Longwill School for the Deaf feature in the video for the song along with young singers from Shireland Collegiate Academy in Smethwick and Watoto Children’s Choir in Uganda.

The song writer is Ugandan-born Andrew Kisumba, the father of current student Eryna Kisumba who is also performing on the track. There will be a series of live performances of the song around Birmingham as part of the festival in the run-up to the Games.

Head of Learning and Participation at RBC Richard Shrewsbury said: “RBC is delighted to have collaborated on this piece celebrating equality, diversity and inclusion in the arts. This project is providing a voice for the unheard through its use of British sign language (BSL) and celebrates the diversity of our city.”

For more information about this project visit yourloveliftsmeup.com where you can also find additional BSL resources and tutorials.

Watch and listen to the track.