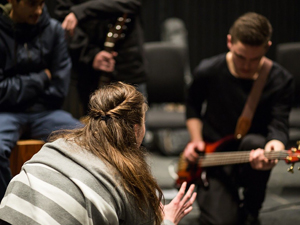 The Young Composers Project (YCP) was founded in 2013 by RBC alumna and composer Kirsty Devaney. Initially, its aims were to support local young people aged from 14 – 19 in creating their own music and to demystify what it is to be a composer.

The focus of the project is to create a safe and supportive space for young people to explore creative music-making. However, the project has since evolved to also foster a community of composers who are passionate about education work.

A number of composition students who work on the project have gone on to do work in the community, such as Peter Bell, Rob Jones and Dan Cippico.

This long-standing scheme now sees former YCP students, who gained places to study at RBC, working as mentors. Kirsty says: “They have grown in confidence to the point that they become the next generation of composers and music educators.”

Kirsty manages the project with a small team of students, making sure that they have enough training and support to work with the young people involved, as well as to help create a space where the project can draw on the different strengths of the mentor team, so that everyone feels a sense of ownership of the project.

The impact of the pandemic

Due to Covid-19 and the resurgence of Black Lives Matter in 2020, the YCP team has reflected on how it engages with young people. It took the decision to adapt to the situation by trialling a series of online workshops that kept the core aims of YCP while working in a way that had the potential to reach more diverse groups.

This resulted in an inclusion statement and the team also aligned the project to the Sound and Music Fair Access Principles.

The online workshops reached students as far afield as the USA, and the team will continue to offer an online strand to the project, to minimise the barriers that some young people face when accessing creative music education.

The music of the project’s young composers will be showcased this year at CODA, a student-run festival of new music, which takes place at RBC in June.

Kirsty added: “Together the mentor team and young musicians are involved in the promotion and creation of the event, and we look forward to sharing over 25 world premieres with audiences.”