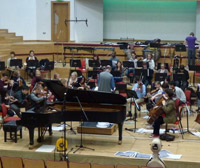 Students from Birmingham Conservatoire, part of Birmingham City University, have been recording extracts of works by Benjamin Britten, one of the greatest composers of the twentieth century, which have never been played or heard before.

A famously precocious composer, Britten archived the scores of his early, often very ambitious work, which he did not believe suitable for public performance. Only now is it possible to take a longer view and present these extracts, which will be of enormous interest both to the general public and specialists.

The recordings by students from Birmingham Conservatoire, will contribute to the online Britten Thematic Catalogue Project, a complete collection of all of Britten’s works currently being compiled by the Britten-Pears Foundation (BPF).

The four-day recording sessions took place recently at Birmingham Conservatoire, with the Symphony Orchestra conducted by Lionel Friend. Colin Matthews, Director of Music from the BPF and Michael Harris, Senior Woodwind Tutor at Birmingham Conservatoire were also in attendance. Michael said: “This project has been an inspiration for me from the outset. From being handed boxes of original manuscripts of hitherto unperformed works of Britten at the Britten-Pears Foundation, to watching and hearing our students record them has been a huge honour and privilege.

“It was thrilling to see the enthusiasm, energy and skill which the students brought to the sessions,” added Michael.

The works recorded by Conservatoire students included some highly ambitious orchestral pieces written by Britten in his early teens. Katherine Birtles, undergraduate flute student at the Conservatoire, said: “I was curious about how Britten’s works would sound, since they were composed when he was very young. The project required a very professional work ethic and I’m pleased that we were able to make such a contribution to the project, which will soon be available for anyone to listen to.”

The recording sessions were a result of the hard work and dedication of Dr Lucy Walker, Director of Learning and Development at the BPF, who also attended the sessions and was first to suggest Birmingham Conservatoire students to record Britten’s works.

Conservatoire staff and students are now looking forward to a first performance of ‘Chaos and Cosmos’, a symphonic tone-poem composed by the youthful Britten, offered as thanks to the Conservatoire from the BPF for their contribution to the online Britten Thematic Catalogue Project. The premiere performance of ‘Chaos and Cosmos’ will take place at Birmingham Town Hall on Friday 21 June 2013, the centenary year of Britten’s birth.