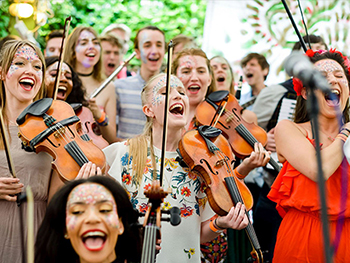 Joe Broughton’s Conservatoire Folk Ensemble, made up of dozens of current music students and graduates from RBC, has been unable to rehearse or perform together for the last 14 months and is releasing a new album, which they hope will coincide with the end of limits on social contact in the UK.

The 50-strong folk band recorded its latest album in March 2020 – just weeks before the first lockdown called a halt to all their musical activity. Now the group is preparing to release its new record ‘Not Leaving Quietly’ on Saturday 19 June, just two days before the UK Government is due to lift final Covid-19 restrictions.

Owing to the size of the popular group, who have packed venues and festivals across the country, band members have not even been able to meet and rehearse together outside under the current restrictions.

‘Not Leaving Quietly’, named after the ensemble’s October 2019 performance of the same name at the EU Parliament in Brussels, will be available to stream from Saturday 19 June, and will be launched with an online listening party featuring films and songs recorded last year, streamed via the ensemble’s Facebook page.

Joe Broughton said: “Even with the expectation that the years 2019 and 2020 would deliver new adventures for the ensemble, nothing could have prepared us for what was to come – including seeing each and every date of the tour that was planned being cancelled.

“We thrive on live performance – there is no other way to really experience the power of the ensemble – as it’s an experience you have to be in the room with. However, that means that we are probably the last band that will be allowed to perform on stage together, as we are usually so close to each other and the audience.

“It’s been very difficult knowing that line-up of the band from 2020 would never walk out on stage together and the new material would not be heard live until June 2021 at the earliest.

“We’re crossing everything ahead of Monday 21 June, as after that date – all going well – we can reunite as an ensemble and pick up where we left off over a year ago. We’re glad to be sharing our celebration of togetherness, persistence and positivity.”

All being well, 2022 will be a massive year for the Folk Ensemble, as it’s planning an extensive tour that includes some of its favourite festivals in the UK, and in May 2022 it’s planning its 25th Anniversary Reunion Concert.

The ensemble used the 14-month lockdown to hold its own online festival, released films of the recording sessions, and band members made lockdown videos from their homes around the world.

Combining traditional folk melodies, styles, reels, ballads and song with contemporary influences from heavy metal to classical, drum and bass to Arabic, the Ensemble produces an immersive live music experience that has won them fans across the globe.

Join JBCFE for their launch party at 7:30pm on Saturday 19 June at www.facebook.com/conservatoirefolkensemble.