Two BSA students are off to The Globe in 2017 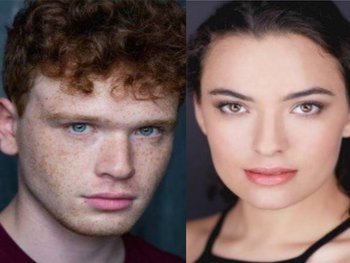 Two third year students from Birmingham School of Acting, Vivian Belosky and Jordan Taylor, have been chosen to represent the school at the Sam Wanamaker Festival 2017.

Vivian and Jordan, who are currently studying on the BA(Hons) Acting course, will be presenting a scene from The Maid’s Tragedy by Beaumont and Fletcher, a revenge tragedy with heart break, revelations and humiliation, to an audience at The Globe Theatre.

“Performing on the Globe Stage is a dream for any actor. We hope to savour the experience and do BSA proud!” says Vivian and Jordan

The festival selects students from the UK’s and International leading drama schools to present scenes by Shakespeare and his contemporaries at the Globe Theatre. Vivian and Jordan will be joined by several other pairs in a weekend of workshops and masterclasses, culminating in a performance of their scenes on the stage at Globe.

Speaking about the opportunity, Vivian and Jordan say “Since our first year we've been audience members at BSA's annual in-house Wanamaker competition. Being passionate about classical text, it was only natural that we put our hats in the ring when we became third years. We chose a scene, auditioned in October 2016, and were chosen to be finalists for the final in November 2016.”

It was through the school that both students received this opportunity, with Jordan and Vivian then finding and directing the scene themselves. The chosen scene will then be explored again by a director of the faculty before the festival.

Vivian and Jordan's advice to other students is: “

Find material that suits you and that you connect to. Take finding Wanamaker scenes as an opportunity to learn as much about the catalogue of Jacobean text as possible- there is so much material that we overlook!

The festival is likely to take place in March or early April 2017.