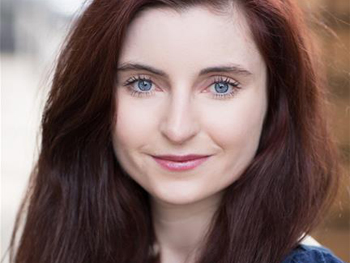 'It's a challenging part to play and sing,' Rachel said.

Rachel and Oliver had never met before due to attending the school in different years. The casting for the production was through the professional casting website Spotlight, which professional actors and their agents subscribe to. Oliver said:

The chance of two BSA’ers being cast in the two lead roles was very slim. It was great to be able to share stories of our time there.

The play is set in a town which has become bankrupt. With a fake miracle to draw in business, and escaped patients from a mental hospital, chaos is sure to arise. It is a piece that tackles big issues such as happiness, sanity and political corruption.

Rachel describes her character, Fay Apple, as a nurse whose life revolves around control and order until she meets the happy and free Hapgood. He teaches her to let go and be free and they fall in love.

“Their duet at the end of the show, With So Little to Be Sure Of is the highlight of the piece for me. My character also sings the title song Anyone Can Whistle, as well as several other key songs,” says Rachel.

Oliver, who plays J Bowden Hapgood, describes how is character came to be in the situation that was part of the plot. Hapgood comes to a new town to commit himself to the local asylum as the pressures of life have become too much. In a case of mistaken identity, he is assumed to be the asylum's new doctor. This leads to Hapgood being enlisted by the corrupt town council to help them determine which of its residents are sane and which should be sent to the asylum.

“It's a complicated and crazy piece! In the process of all the confusion, he falls in love with the asylum's chief nurse, Fay, played by Rachel,” Oliver explains.

To be cast in the new London revival at one of London's top off-West End venues is a huge privilege, and we've got some big shoes to fill!
Oliver Stanley

Rachel has previously worked with the show's director, Phil Willmott, during the summer when she played Sonya in Crime and Punishment. This was a new rock musical with music by Toyah Willcox which played at The Scoop Amphitheater by City Hall in London.

You can buy your tickets for Anyone Can Whistle from Union Theatre’s website.

Find out more about the work of our students and meet our graduates: