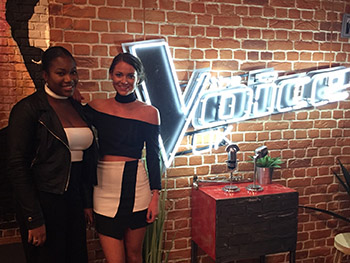 Two students from Birmingham City University have wowed the judges on The Voice UK, progressing to the next round after their blind audition, which aired on Saturday 14 January.

Zoe Hedge and Ebony Wilson, studying Applied Performance at Birmingham School of Acting, performed Lauryn Hill and Tanya Blount’s version of Gospel hymn ‘His Eye Is on the Sparrow’ as superstars Jennifer Hudson, Sir Tom Jones, Gavin Rossdale and will.i.am initially sat with their backs to them on the ITV programme.

The duo quickly impressed Sir Tom Jones and Gavin Rossdale, who pressed their buzzers to rotate the infamous red chairs and signify their interest in working with Ebony and Zoe. After much deliberation, the undergraduates chose Sir Tom Jones to be their mentor, who will now work with the pair as they prepare for the next stage in the competition.

Ebony and Zoe – known as Capital B – met on their first day as students at Birmingham School of Acting, part of Birmingham City University. After singing together in University performances – and in their bedrooms – since September 2014, Zoe persuaded Ebony to audition for The Voice UK with her last and to potentially open more doors to their future.

We are so excited to be part of The Voice UK this year, especially with its incredible line-up of coaches and new home at ITV.
Ebony Wilson, Capital B

“The experience so far has been extraordinary. It has allowed us to develop our voices and work with the very best in the professional music industry.”

Ebony Wilson hails from Smethwick in Sandwell and has been passionate about singing from an early when she was part of the Birmingham-based World Music Youth Choir. She was also part of the Handsworth female a capella group Black Voices and was once a backing vocalist for a Tom Jones tribute act. As herself said: “It was written in the stars for us to be Team Tom!”

Zoe Hedge comes from Bishops Castle, a small market town in South Shropshire. She comes from a musical family and has loved singing since her first solo as Mary in her school Nativity play, aged five. Outside her University experience, Zoe has also been part of vocal groups, theatre companies and taken part in various amateur performances.

Birmingham School of Acting was the reason we met and where we began to sing together, so it will always be an integral part of our journey. We hope everyone enjoys watching the incredible talent on The Voice UK this year and that you are all on board with Team Capital B!
Zoe Hedge, Capital B

Once all the blind auditions have been shown, the third-year students will next be seen in The Voice UK’s battle rounds, where they will be pit against other contestants in Sir Tom Jones’ category, in a bid to reach the show’s live finals. 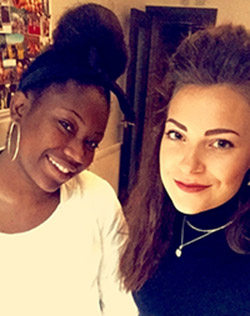 Alongside their appearance on The Voice UK, Ebony and Zoe will be continuing with their studies at Birmingham City University. Studying Applied Performance, their course seeks to prepare passionate and skilled theatre-makers, who want to make a real difference through drama, singing, dancing, spoken word, a documentary or digital art. The focus is on creating new performances and projects with a purpose.

“Ebony and Zoe first met on the Applied Performance course at Birmingham City Universty, and have sung together, as well as with the other students, in productions and classes. We are all really aware of how brilliant they are, and are so proud of their success so far on The Voice UK.

They are both great students, who have been a joy to teach and are really committed to all the work we do; making theatre for young people, and for community groups.

“Although appearing on The Voice UK, they are continuing their studies, working on drama projects with people and with children with learning disabilities, and they have even handed all their essays in on time!

“The students on our course are like a real family and, along with the entire University, we will all be cheering Zoe and Ebony on like crazy.”

Birmingham is represented elsewhere on The Voice UK, as presenter Emma Willis was born and raised in Sutton Coldfield.

Follow Capital B’s progress on The Voice UK through their social media channels: