The Heroines of Shakespeare 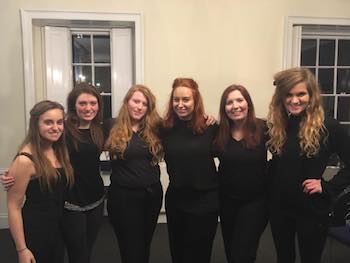 Amy Fallon, a Birmingham School of Acting (BSA) 2015 graduate, will be starring in Emberfly Theatre’s first production titled Heroines. The play is inspired by the female characters in Shakespeare’s work.

The characters within the play consist of Shakespeare’s most famous and infamous women, who are then placed in a 21st century setting.

Amy says: “I would say it is an inspiring, witty and wholesome piece of new writing. It is also a feminist production, in my eyes, celebrating well known strong female Shakespearean characters.”

She adds that the play will help inspire the feminists of today and gracefully commemorate the heroines of Shakespeare's day, in a new original and refreshing twist.

Emberfly Theatre, founded by Joanne Sealey and Hannah Abbott, is a new collaborative theatre company for emerging artists. Their mission statement says: “We specialise in creating new work through a combination of script writing and devising. We seek to create work that has a focus on being positive and proactive whilst keeping the female story at the forefront. We want to tell stories that are important. Important to us personally and culturally both historic and present.”

Heroines comes at a time when women’s rights are becoming more recognised and supported globally. Shakespearean has been largely known for its male leads, so this production is a wonderful example of celebrating the strong women characters within plays.

“There are so many incredible Shakespearean women but their story is always muddied by a male-centric storyline. We've plucked six female characters we felt drawn to from Shakespeare's plays. These women appear ahead of their time; their strength shines through the mass of men they are presented with," say the theatre founders.

"We want to bring them to life. We want to normalise these women. They are here today, living amongst us doing ordinary things and ordinary jobs. The woman next to you on the tube is a powerhouse. Your best mate has social anxiety. The woman working behind the bar is a rebel. These are our heroines.”

The theatre company recently set up a kickstarter page for Heroines to raise the money so they could fund venues, rehearsal spaces, props, stage management and the cast.

Emberfly Theatre describe themselves as a company “whose focus is on supporting emerging artists. Aiming to constantly try to provide support and platforms for emerging artists. And to help them develop skills, industry contacts and creativity in a professional environment.”