Teenager gets his musical break 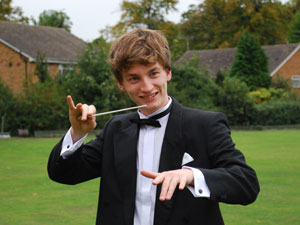 A teenager who was seriously injured in a fall is having his wish come true, by conducting an 80 voice choir at Birmingham Conservatoire, part of Birmingham City University.

Seventeen-year -old Jack Apperley from Stourbridge, a current Junior Conservatoire student, was treated in Russells Hall Hospital, Dudley in October 2010 following a fall from an attic window that resulted in him breaking both his ankles and three vertebrae. Whilst in hospital organisers of the Russells Hall Hospital Wishing Well Appeal, which aims to make wishes come true for children who are in hospital, got in touch and organised for Jack to live out his musical fantasy.

Steve Ford runs the Appeal, has arranged for Jack to conduct a voice choir performance of Zadok the Priest by Handel, which is traditionally performed at royal coronations. Jack, who has now recovered from his injuries, will be taking up the baton at a free public concert at Adrian Boult Hall, Birmingham Conservatoire on Friday 23 September. The concert is part of the Conservatoire’s freshers’ week activities, where he will conduct the Freshers’ Chorus. The Chorus is a musical project which involves students rehearsing and performing one single work within three days. Chi Hoe Mak, an alumnus of Birmingham Conservatoire, will be directing the choir and helping Jack throughout the performance – an opportunity which most aspiring conductors wouldn’t have till much later in their career.

Wendy Apperley, Jack’s mother said, “We’re delighted that the Conservatoire is able to make Jack’s dream of conducting this piece come true. Obviously, we were very worried when he was taken in to hospital, but he’s come out of it without any lasting damage and now something really special will come out of his experience thanks to Steve Ford and Birmingham Conservatoire”.

The Freshers’ Chorus will perform at 3.30pm at Adrian Boult Hall, Birmingham Conservatoire on Friday 23 September and is a free event.