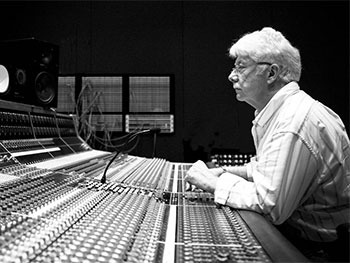 British record producer Ken Scott will this week claim that the talent of today's pop stars does not match that of the 'golden age'.

Speaking at a public event hosted by Birmingham City University on Friday 14 November, Mr Scott will draw on his experience as a leading sound engineer working with hugely successful artists including the Beatles, David Bowie, Elton John and Pink Floyd. He will share his tales from the mixing desk with the public audience, as well as share his controversial views on the music industry today.

"Today's pop stars rely too heavily on auto-tuning and other music 'gimmicks' to create manufactured sounds and the results will never match the talent that came out of the 'golden age of pop' from the Beatles era and beyond," he said.

"Unlike today's recording artists we used to have to produce an album every six months, which meant only the best could keep up the pace.

"Pop stars today are guilty of relying too heavily on technology. There's an over use of auto-tune, and an unwillingness to sing live which sets today's stars apart from those from 30, 40 and 50 years ago.

"True talent is out there but those in charge of finding it (often the big labels) sell out for gimmicks and they manufacture sounds in the studio to get tracks to sound "perfect" then sell an image.

"The real key to success is feeling it in your heart and not the desire to be rich and famous."

More information and book your place