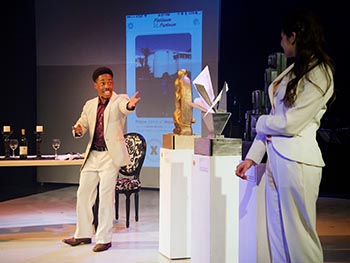 The bursary supports students who are having financial difficulty when going into their final year at drama school. Each drama school can nominate two students for the bursaries. The nominated students then audition in front of a panel.

“By winning the bursary, it's allowed me to get my headshots with a photographer that I wanted and it's also allowed me to save for after I graduate, as I plan to move to London next year," says Khalid.

"The audition day was amazing and such a great motivation of what it could be like after I graduate. I had to perform a monologue and song of my choice at the St. Martin's Theatre in the West End. In addition, I also had an interview with members of SOLT (Society of London Theatre) about my time at BSA so far, my credits and why the money would be helpful for third year.

"Hopefully, when I finish BSA, I'd like to move to London as I feel as though so much of the work is down there. Plus, it's always been a dream of mine to network out there.

"By winning the bursary, it's giving me such a drive to excel in third year and make sure I achieve my dreams."

Due to the commitments of drama school, part time work is usually impossible for many students. This bursary helps to support those struggling, so they are able to achieve at their highest potential without the worry of financial difficulty that could hold them back.