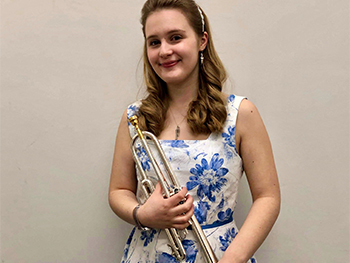 This year marks 20 years since the death of the great violinist and teacher Clarence Myerscough, and of the founding of the charity in his memory.

The trust makes an annual award to string players at the Royal Academy of Music, London, where Clarence taught. This year, the trust felt it would be fitting to celebrate the 20-year milestone by making a further award to a brass player at RBC.

Student submissions were made via videos, including a performance and an explanation of how they would spend the prize money if they were to win. There were some 20 entrants.

The five finalists were selected by Head of Brass Amos Miller, Associate Head of Brass Alan Thomas and Head of Piano Accompaniment in Wind and Brass Jo Sealey. The finalists' submissions were judged by the trustees, who selected a winner.

Libby is a third year student studying the trumpet on the BMus classical course. She explained in her submission that she would use the money towards getting her own natural trumpet.

She said: “I am currently really lucky to be borrowing one of RBC’s natural trumpets, but winning the prize will help me get my own as I am sure that early music and historical performance is something that I would like to pursue in the future.”

Libby added: “It is such a lovely surprise to be the winner and I am truly thankful, as the award will allow me to keep on pursuing my love of the natural trumpet and early music.”

Amos commented: “Clarence Myerscough was one of the finest violinists and teachers of his generation, as well as being one of life’s great enthusiasts. He was a source of great inspiration to generations of young musicians. The Brass Department is deeply honoured to be associated with an award in his name.”