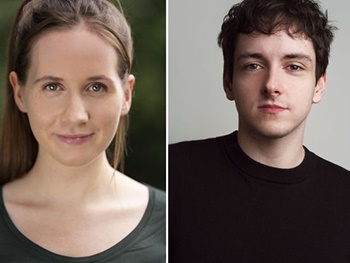 Georgie Lomax Ford and Connor Curren received the award following the second stage of the event, which saw 28 students in the running.

The prize will cast them in at least one BBC radio drama this year.

Connor will take up a three-month opportunity in the RDC next year.

Named after one of Radio’s most distinguished actors, the Carleton Hobbs initiative has been run by BBC Radio Drama every year since 1953.

The Carleton Hobbs bursary is aimed at students graduating from undergraduate or postgraduate courses run by accredited drama schools across the country. It identifies distinctive, versatile radio voices to form a nucleus of new talent within the autumn season's Radio Drama Company.

The prize is an opportunity to extend the students’ training in a unique acting environment - one where they’ll work with the best actors and writers in the country on a wide range of contemporary and classic plays.

Connor said: “It was totally unexpected. It’s such a great honour to work with such a prestigious company and I owe it all to our radio tutor Peter Leslie Wild, radio consultant Marina Calderone and the team for whipping the voice into fighting shape.”

Georgie said: "I am very grateful to have been given the opportunity to represent RBC in the Carleton Hobbs awards. I am hugely proud of Connor for doing so well, and I'm absolutely made up to have been awarded the runners-up prize. It has been a great experience working alongside Senior Lecturer in Acting Clifford Milner, Peter and Marina as we progressed through the competition, and I am very excited to join the BBC Radio Drama Company in Autumn/Winter."

Peter Leslie Wild is an award-winning producer and director across theatre, radio, television and online. Marina Calderone who worked with the students as a consultant is also an experienced theatre director, radio drama producer and acting coach.