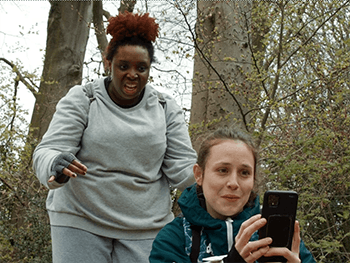 A short comedy featuring RBC Acting graduates has been selected at four international film festivals, and received an Honourable Mention at the New York Movie Awards.

‘Swamp Women’ is a short comedy about friendship, which follows two women on an adventure holiday in the New Forest. Charlie doesn’t want to be there. Chaos ensues, and it gets messy for Paige.

It has been officially selected and screened at the Rome Independent Film Fest, Paris International Film Awards, and Festival Deux Cans in the UK, and won an Honourable Mention at the New York Movie Awards.

Clifford said: “I was not expecting to be able to shoot and enter a film this year due to Covid restrictions, so it been very gratifying that we were able to create something significant in spite of the pandemic. I am absolutely delighted for all our graduates not just featured in this film, but in the other 13 shorts we managed to shoot, all exteriors, over two weeks, during April.

“Most of the films were written by the students – a remarkable achievement.”