Serenade the one you love… with a carrot 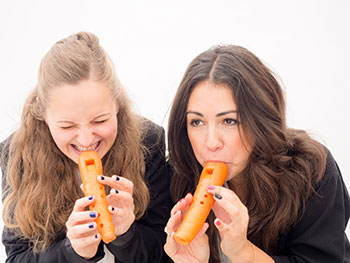 "If music be the food of love, play on.” The words of Shakespeare will be taken literally this Valentine’s Day as lovers in Birmingham are being encouraged to woo a partner with a performance on a recorder – made from a carrot.

Tim Cranmore from Malvern in Worcestershire has been making recorders from wood since 1980, but next week he will be showing budding musicians at the Royal Birmingham Conservatoire how to make their own from the humble root vegetable.

“The similarities between a boxwood tree – used traditionally to make a woodwind instrument – and a carrot are glaringly obvious if you think about it. They are both organic, cylindrical and grow in the ground. However, one is orange and the other isn’t, although this distinction is a minor one when it comes to design.

“By following the principles of recorder construction with a carrot, it is inevitable that a working instrument will be born. However, to get one to play over an octave, in tune and in G major, requires 40 years of experience. To make one in real time, in front of an audience, requires nerves of steel.”

Another highlight of the Festival will be The Art of Moog (Friday 16 February), which sees the work of Bach played completely live, on multiple synthesizers. Marking the 50th anniversary of Wendy Carlos’ ‘Switched-On Bach’ – which played a key role in introducing synthesizers to pop music – this preview performance comes ahead of the group’s official debut in London later this year as part of the 2018 Bach Weekend at Kings Place. 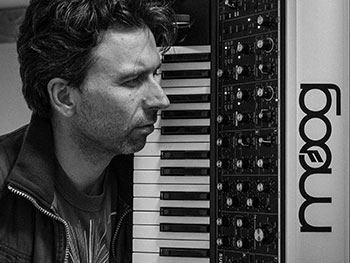 Alongside masterclasses, taster workshops and an enlarged Early Music market, the Festival welcomes big name acts such as The Gonzaga Band and Bonfire Radicals performing on Thursday 15 February, Swedish recorder player, Dan Laurin with harpsichordist Anna Paradiso and London Handel Players with dancers, who all take centre stage on Friday 16 February, and Annabel Knight and members of the Royal Birmingham Conservatoire Recorder Department, Warwickshire Youth Waits, Musical and Amicable Society and Late Night Loops, a blend of old and new technology, all featuring on Saturday 17 February.

In between these performances, under-18s will be competing as part of the Birmingham Young Recorder Soloists’ Competition, with 17 participants all hoping to secure valuable prizes given by Tim Cranmore Recorders, The Early Music Shop and Recorder Music Mail.

The Birmingham International Recorder and Early Music Festival closes on Sunday 18 February with the Walter Bergmann 30th Anniversary Celebration Concert, a special event commemorating the life and achievements of the recorder player and early music pioneer Walter Bergmann, three decades after his death.

“For many of us, the recorder evokes mixed memories of the school classroom, but it should not be underestimated, as it allows young performers to quickly develop their musical skills. Performed to a high standard, the recorder is a wonderful flute that can evoke both majestic and subtle sounds, yet comes with a playing technique that hasn’t changed in its 700-year history.

From Renaissance and Baroque greats to modern artists such as Kate Bush, Led Zeppelin and The Rolling Stones – not to mention various modern classical quartets – the recorder continues to inspire, providing the perfect gateway for people to learn more about Early Music, and we are delighted that our Festival will be able to showcase this incredible and versatile instrument.

“As well as a host of performers and practitioners, we’re also delighted to be welcoming Professor Elizabeth Kenny for an illuminating seminar on lute and theorbo technology, while Conservatoire alumna Francesca Clements gives an introductory workshop for teachers and performers to demonstrate how educators can include live electronics within their music lessons. So, regardless of whether you are new to the recorder and Early Music or an aficionado, there really is something for everyone at this Festival.”

A woodwind musical instrument, the recorder was first documented in Europe during the Middle Ages and enjoyed wide popularity in the Renaissance and Baroque periods, often referred to as the Early Music era.

Since the early 1990s Birmingham City University’s Royal Birmingham Conservatoire has maintained a strong commitment to practice and performance of Early Music through an innovative programme of cross-departmental activities. All its students have the opportunity to study a period instrument or to have stylistic awareness lessons with specialist visiting tutors, and advanced performers can audition for Birmingham’s renowned Ex Cathedra choir and orchestra. 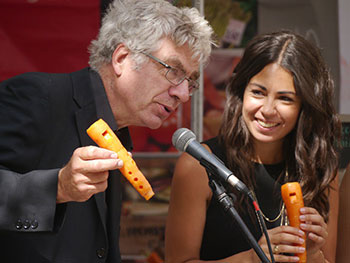 Tim Cranmore’s carrot recorder demonstrations will take place in the Level 2 foyer of the Royal Birmingham Conservatoire 2-3pm on both Friday 16 and Saturday 17 February.

Tim is a founding member of the London Vegetable Orchestra (LVO) in 2011 and alongside performing as Principal Carrot, he is also the group’s Master Instrument Maker. Therefore, as well as preparing carrot recorders fresh for every performance, he also creates courgette trumpets, butternut squash trombones and pumpkin percussion.