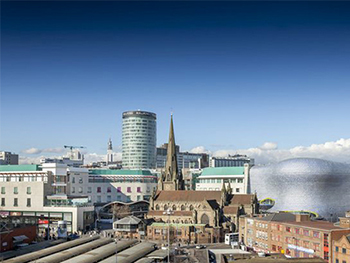 Live music organisations in Birmingham have benefitted from just 2% of the first round of Cultural Recovery Fund (CRF) awards, academics have revealed.

An analysis of this week’s CRF announcement data by the Birmingham Live Music Project Team suggests that the balance of funding is in favour of non-musical organisations with a track record of securing public funding pre-Covid-19.

Additionally, researchers from the collaborative academic and industry initiative between Aston University, Birmingham City University and University of Newcastle suggest the live music sector is vital to the nation’s collective morale, and protecting cultural activity requires much more work by the Government.

Birmingham Live Music Project Lead Dr Patrycja Rozbicka has identified a disparity between the amount of funding received by organisations with a music and non-music focus.

Following the release of the first tranche of funding on Monday 12 October, Dr Rozbicka said, “As anticipated, across all 28 music organisations to receive a CRF award in Birmingham, only a few are venues or organisations that have a dedicated and primary focus on live music.

“Within this number, the three largest grants (combined total of £2,523,668) have been awarded to three regularly-funded organisations (RFOs): Birmingham Royal Ballet, the City of Birmingham Symphony Orchestra and Midlands Arts Centre (mac).

Out of the 28 organisations, only three grants (combined total of £349,000) go to local live music venues. The rest land with classical organisations, theatres and dance studios.

“Out of 197 live music venues active on the scene in Birmingham before lockdown, only an estimated 6% have received funding from the scheme. Across 1,385 theatres, museums, music venues and cultural organisations that will receive help from CRF across the whole country through a share of £257 million, only 28 businesses or organisations in Birmingham benefit, to the tune of £5,285,771. Birmingham is the second largest city after London, yet secured just 2% of the funding available.”

Monday’s announcement of round one Cultural Recovery Fund beneficiaries, made by Secretary of State for Culture, Media and Sport Oliver Dowden, follows overwhelming industry calls for further government support for those working in the live music sector, particularly freelancers, in the wake of continued restrictions around live performances, and strict social distancing measures across the UK.

Dr Adam Behr, also of the Birmingham Live Music Project, said, “What the government response needs to start taking into account is the need for a more strategic approach. Music’s significant contribution to the economy as a whole – in jobs and Gross Value Added (GVA) – is closely connected to the way that venues are embedded in their localities and communities. When lost, they are hard to replace. The cultural connection to a space can't easily be switched on and off. So while support for individual organisations is both welcome and vital, it’s necessary to acknowledge that every business lost can weaken the network as a whole – and increase the task of building back.

“Protecting cultural activity means thinking through the implications of a range policy initiatives and their connections – from the planning system and employment – and self-employment protection – to Brexit (and movement of people). This sector is vital to the UK’s economy, and its identity – morale, even. It can’t be an afterthought.”