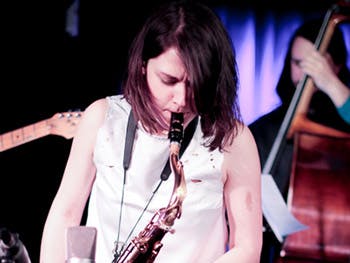 A celebrated contemporary music festival comes to Birmingham for the first time this month.

Emulsion will take place on Friday 27 January at mac Birmingham, following three successful events in London, and one in collaboration with Cheltenham Music Festival.

The brainchild of saxophonist and composer Trish Clowes, Emulsion V will be hosted by BBC Radio 3 presenter Fiona Talkington.

As a multi-genre event, Emulsion provides a platform for contemporary composition and improvisation, and fosters collaboration between like-minded musicians.

This special one day event will showcase a triple bill, with the Emulsion Sinfonietta performing a set comprised of new work from Cevanne Horrocks-Hopayian, Hans Koller and Percy Pursglove, as well as the existing Emulsion repertoire, including a piece by Dr Joe Cutler, Head of Composition at Birmingham Conservatoire. Acclaimed saxophonists Iain Ballamy and Joe Wright will also make guest appearances.

Also performing will be Clowes’ new small ensemble My Iris, with Ross Stanley on organ and piano, Chris Montague on guitar and James Madden on drums. They will present selections from Clowes’ fourth album – also called ‘My Iris’ – which was recently released on Basho Records. The Hans Koller Quartet, featuring John O’Gallagher, will open the evening’s performances.

As well as being recognised by the British Academy of Songwriters Composers and Authors (BASCA) at the British Composer Awards – winning in the Contemporary Jazz Composition category in 2015 – and a former BBC Radio 3 New Generation Artist, Trish Clowes is now carrying out research for her PhD at Birmingham City University. She said:

I'm really excited to be bringing Emulsion to Birmingham as part of our continuing evolution. I love being able to bring together so many special individuals at these events and I can't wait to hear the new sounds that will come out of this unique Birmingham edition.

“We've had incredible support from local musicians – including Joe Cutler, Hans Koller and Percy Pursglove – and organisations – including mac birmingham, Birmingham City University, Jazzlines, thejazzbreakfast and Stoney Lane Records – and special thanks go to saxophonist and composer Tom Harrison and broadcaster Fiona Talkington. To the universe and beyond!” 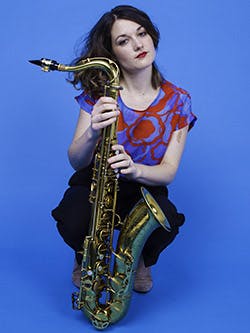 Trish is one of 50 ‘STEAM Scholars’ at Birmingham City University, whose research is funded as part of the institution’s £3 million initiative to create new subject knowledge and to power cultural, societal and economic improvements locally, nationally and around the world.

Her research looks at the political affairs of music festivals and considers the politics within music performed, as well as the relationship among organisers and performers, and how they interact with audiences.

In addition to the three performances in mac’s main theatre, the Emulsion will explore other spaces in the venue, featuring ‘pop-up’ solo and duo performances, as well as a panel discussion chaired by Fiona Talkington in the afternoon, in partnership with Birmingham City University.

“In my working life as a radio presenter and curator I’m lucky enough to enjoy many creative partnerships with musicians and festival directors around the world. Trish Clowes and Emulsion inhabit a world which is very much part of my own thinking and the way I’ve developed my work with BBC Radio 3’s ‘Late Junction’ over the years, for example.

“Trish’s work as performer, composer and curator plays a central role in British contemporary music and there is nowhere better than the hugely vibrant scene in Birmingham to host Emulsion V.

“I always see my role as presenter as a creative thread joining backstage to audience, assuring performers of how much they are valued, and giving context to audiences, whether seasoned concertgoers or those approaching improvised music for the first time”.

The work of students from Birmingham City University and its Birmingham Conservatoire will feature throughout the evening and, in particular, two new works by Bobbie Gardner and Anna Olsson will be premiered.

The event will be recorded for broadcast on BBC Radio 3’s ‘Hear and Now’ and ‘Jazz Now’.