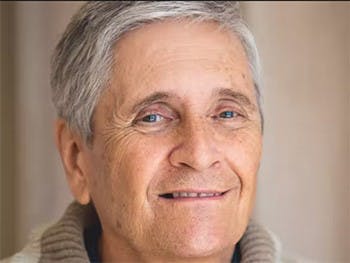 Musicians from across the UK have been remembering Andrew Downes, former Head of Composition and Creative Studies (1990-2005) at Royal Birmingham Conservatoire [RBC], who has died aged 72.

Professor Shirley Thompson, Interim Principal of RBC has led tributes to the Emeritus Professor and Honorary Fellow (pictured), who made a significant contribution to the acclaimed music institution during - and after - his tenure, celebrating his deep and lasting impact on not just the Conservatoire's staff, student and alumni community, but across composition and music-making much further afield.

Well-respected as a composer around the world, Andrew Downes’s music has been performed in many leading concert halls and cathedrals and has been broadcast at home and abroad.

RBC offers an annual Andrew Downes Performance Prize, developed and supported by the Downes family for almost a decade.

Former colleagues and students have shared their memories of the composer-musician, described as ‘warm’ and ‘a proud Brummie’.

"In establishing and developing composition/music creation as a subject area at RBC, Andrew was a visionary and years ahead of the field.

"Andrew embraced everything within music, but most especially, he nurtured everything connected to the communal act of making music. He saw it as something far beyond the inflexible boundaries of genre. He was warm, generous, funny, passionate, bold, inquisitive and inclusive. All these values are reflected in his music which stands as a powerful legacy.

Andrew was a proud Brummie, who celebrated the diversity of this great city through his composition and through his teaching. He touched and enriched the lives of so many people, and my thoughts are with his lovely family, many students and friends.

"He was a person who gave so much and was so loved in return; Andrew made the world a better place."

"Professor Andrew Downes was living proof that you can be a skilled and disciplined musician at the same time as being a jovial and positive teacher.

"Andrew was someone who, though not taking himself too seriously, put all of his students at ease, and in the best possible place to be creative. When I was a student, I loved his rebellious streak. When he first gave me a job, I was so grateful for the confidence he put in me.

People are often described as being an inspiration, but in Andrew's case this was immeasurably true; his influence and generosity of spirit sent ripples well beyond the Conservatoire.

“One cannot simply describe Andrew as being a great musician or a great teacher, perhaps something like "guru" wouldn't be overstating it. There is certainly an outpouring from his "devotees" on the news of his passing, and in everything you read, it is his humanity, humour and ability to instil self-belief in everyone he met, that shines through.

“It is profoundly sad that Andrew has gone but he leaves a very special legacy in his music and in the very many people that he inspired to do good work.”

“Andrew was my first composition teacher and the many hours I spent in his company will live with me forever. He was kind, funny, knowledgeable, inquisitive, generous, and caring.

“Through his knowledge of repertoire, he opened my eyes and ears to music I knew nothing about and to music that changed my life.

“Whenever I saw him at the Conservatoire, whether it be walking down a corridor or in later years, in the staffroom, he always stopped for a chat and we usually always ended the conversation with a laugh and a chuckle.

“I played a few of his works as a violinist, most notable was the world premiere of his String Quartet No.2, which meant our quartet spent a lot of time in his company. With us, he showed a lot of patience, helped us understand his piece and also helped us as a young ensemble in many broader musical ways.

Andrew's humour was often heard in his music - nobody who played his Centenary Fire Dances under the baton of Jonathan Del Mar will ever forget it! That work also showed his huge love of people, as he tried to include every major Birmingham cultural influence in that work.

“Legendary is an often over-used word but in Andrew’s case, he deserves it. There are thousands of people who were touched over the years by Andrew’s compositions, his teachings, his humanity, his personality, his warmth, and his humour.

"Today, those people, like myself, will be sad to hear of his passing and I hope, will raise a glass to one of the loveliest people you could ever wish to meet and to a man who made other people’s lives better through knowing him.

“Not only was Andrew the most talented of composers, he was the loveliest and kindest man. There is no doubt that his beautiful music inspired me to compose music myself.

“I have very powerful memories of singing alongside Deborah Drury in the first-ever performance of the epic Marshes of Glynn, and then performing in the equally stunning Centenary Fire Dances in Cannon Hill Park in Birmingham.

Andrew should have had a great deal more recognition for his incredible music, really his music is far superior to the likes of more well-known composers that are household names.

“If you love beautiful music, then do seek out his music. He composed gorgeous choral music as well as instrumental and orchestral pieces. His music is melodic and lush, and pays tribute to all the cultures of our country. The gift of his music will last forever.”

“In his time at the Conservatoire Andrew made an incredible impact on the musical culture of Birmingham.

“Certainly, anyone who has benefited from my work owes that to Andrew opening a door for me one day in Birmingham.

“No amount of legislation, levelling up agendas, committees or schemes will make a difference.

“What's required is people like Andrew in the right position who are willing to take risks and open the doors to those outside.

“Andrew's department encouraged the creative growth of the individual and allowed them to pursue their own creative journey.

“A talented and successful composer himself he never put his music first before students or pressed his personal approach.”

“I remember Andrew Downes fondly as one of my first bosses at the Conservatoire.

“He had a deep love of classical music but was a major force for good in ushering in a huge range of music to our Conservatoire, from jazz to Indian classical, folk to rock, and everything in between.

“There were many amazing projects that Andrew brought to fruition, not least of all being a significant voice of support in getting the Jazz Department firmly established.

“I think I’m among many musicians who owe Andrew Downes a debt of gratitude for his magnanimity, encouragement and vision.”