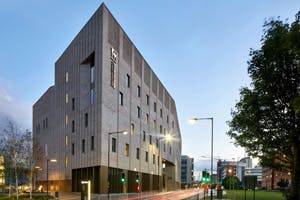 Royal Birmingham Conservatoire is one of 84 UK research centres whose work in the areas of Music, Drama, Dance, Performing Arts, Film and Screen Studies was assessed in the latest Research Excellence Framework review.

The Conservatoire was evaluated across its outputs, including articles, books, scholarly editions, performances and compositions, with a panel evaluating significance, originality, and rigour, and in a national or an international context.

It was also scored on the quality of the research environment developed since the last review in 2014, and the impact of its research beyond academia.

Highlights from the review include:

RBC Interim Principal Dr Shirley Thompson said: “Clearly, these results are terrific, reflecting the research strengths we already knew RBC had, of course – although it is good to have our achievements validated in this way.

“Huge thanks and congratulations to Professor of Performance-led Research in Music and Director of Research at RBC Jamie Savan and the wider RBC research management team for leading this exercise so expertly, and to all colleagues who contributed to the submission itself.  It’s a great outcome, very well deserved.”