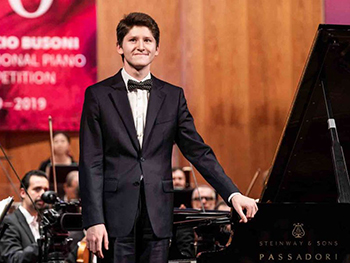 Emanuil took the top spot with a performance of Saint-Saëns Concert n. 2 op. 22 in the final of the prestigious competition for young pianists in Bolzano, Italy on Friday 6 September.

I am delighted that Emanuil Ivanov has won First Prize at the prestigious Busoni International Piano Competition. He is a huge natural talent who has the ability to reach the greatest heights as a musician. As Principal of Royal Birmingham Conservatoire I would like to pay tribute to Emanuil’s two wonderful teachers, Pascal Nemirovski and Anthony Hewitt, for their inspirational guidance and encouragement.”

Born in 1998 in Bulgaria, Emanuil Ivanov studied with Professor A.Kurtev, before joining Royal Birmingham Conservatoire under the tutelage of Pascal Nemirovski and Anthony Hewitt.

In May 2019, Emanuil won both second prize and the Audience Prize at the prestigious Allessandro Cassagrande International Piano Competition in Italy.

Emanuil's studies at Royal Birmingham Conservatoire have been enabled by a generous Scholarship provided by the Denis Matthews Memorial Trust.