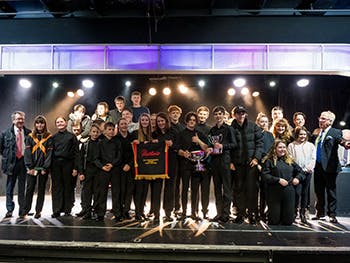 RBC is delighted to announce that the Youth Brass 2000 (YB2K) will be taking on a new role as Youth Band in Residence at the Conservatoire from Spring 2021.

Current Brass Band students, under the direction of Director of Brass Band Studies Ian Porthouse, will work alongside the talented young players from YB2K, as well as organising a concert next year.

YB2K is the current British Open Youth at the Guild Champions and former European, National Youth, and BrassFest UK Entertainment title holders, and has gained a hugely respected reputation for musical excellence since its formation in 1989.

The band has led the way in the development of countless young musicians, with a number going on to enjoy successful professional musical careers.

The residency at the Conservatoire will reinforce the link between community youth banding and the higher education sector, as well as offering YB2K members access to workshops from RBC experts and collaboration opportunities, and current students with mentoring opportunities.

Head of Brass Amos Miller said: “We hope that this will be an inspirational opportunity for both sets of young people: our students can hone their pedagogical and mentoring skills, and the YB2K players will be able to be inspired at first hand by Conservatoire life. Ian and I very much look forward to leading workshops with YB2K over the next few months to begin what we are sure will be a fruitful and enjoyable relationship.”

This is the first time that a UK Conservatoire has developed a partnership with a youth band, and it will be an exciting addition to the relationship with the Conservatoire’s Brass Band in Residence, the Tredegar Band.