Researchers’ film to be shown at Luleå Biennial 2022 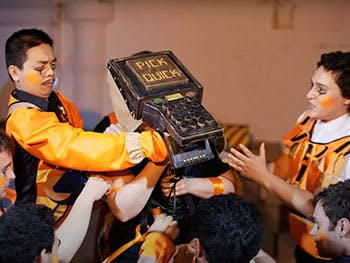 ‘Autohoodening: The Rise of Captain Swing’, an operatic-folk-masquerade feature film created by PhD researchers Daniel Blanco Albert and Roxanne Korda, is being shown at the Luleå Biennialin Boden, Sweden, from 15 October to 15 January 2023.

Devised by Infinite Opera and Post Workers Theatre during the Covid-19 pandemic, ‘Autohoodening: The Rise of Captain Swing’ centres on warehouse worker testimonies and interviews with union organisers.

Based on the midwinter custom of Hoodening, a historic parade performed with a horse effigy by farm labourers in East Kent, the film reimagines ‘Hoodening’ as workers’ theatre for the age of Amazon warehouses and platform capitalism.

The film was shot at Vivid Projects in Birmingham by Andy Willsher and Iain Armstrong, with costumes created by James Frost and Lottie Wood.

Daniel said: “We are thrilled to have Autohoodening shown in Sweden. It is such a reward after all the work we put in during lockdown, spending countless hours video and sound editing.

“I am excited to travel to Boden in Sweden to give a talk about the music and my research on 27 October.”

Daniel will be giving a presentation about the process of composition of the music at the Boden site, where an art installation including the costumes of the performance and a looped projection of the film is displayed.

View more information on the film and watch the trailer.