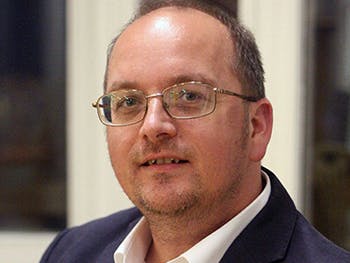 RBC Professor of Music Christopher Dingle has been named by BBC Radio 3 and the Arts and Humanities Research Council (AHRC) as one of seven researchers who will receive funding to recognise and celebrate historical classical composers from diverse ethnic backgrounds.

The funding aims to expand the breadth and diversity of what is accepted as belonging to the classical music canon, and uncover more about the lives and work of composers who haven’t had the recognition their work deserves.

Chris' research was chosen by an expert advisory panel, which also selected and awarded grants to researchers of Japanese composer Kikuko Kanai (1911 – 1986), Sudanese composer Ali Osman (1958 – 2017) and Scottish composer Isaac Hirshow (1883 – 1956), among others.

The studies of the seven researchers will help inform performances and broadcasts on BBC Radio 3 by the BBC Orchestras, including a special concert later this year which will showcase works of the composers featured in the research of the seven academics.

Chris said: “I feel privileged to participate in this BBC Radio 3 / AHRC project alongside my fellow recipients who are superb advocates for an amazing group of composers.

“Saint-Georges has been one of my long-standing enthusiasms. I finally now have a chance to turn my attention to him properly, notably his contribution to the peculiarly French genre of the Symphonie-Concertante. I feel extremely lucky and grateful that the scheme has arisen at an ideal time. It's going to be wonderful to work with them on this extraordinary figure. Saint-Georges is a hero for any age and his music really should be on every stage.”