Poetry Professor teams up with Conservatoire alumnus for special recording 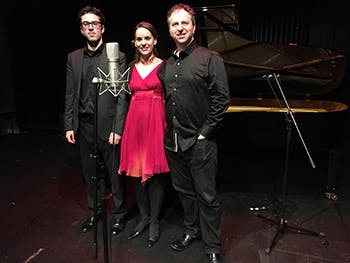 BCU Professor of Poetry in the School of English Gregory Leadbetter has worked with composer, pianist and Conservatoire alumnus Eric McElroy to set a selection of poems to music.

The Fetchis a song-cycle that sets five of Professor Leadbetter’s poems to music for piano and voice. This unique poetic and musical collaboration celebrates “the ability of art to reawaken the mystical in the ordinary” and to unleash (in the words of one of Leadbetter’s poems) “a sense between / the skin and something understood”.

A recording of the song-cycle, performed by Eric alongside soprano April Fredrick in January in the Studio at the Conservatoire, is available to watch on Youtube.

Professor Leadbetter said: “Eric and I met at the Robert Graves Conference in Mallorca in 2018, where he was performing his setting of several of Graves's poems, together with April Fredrick, and I was giving an academic paper and a poetry reading from my book The Fetch. We were both struck by each other's work, and chatting over dinner, we discussed the possibility of a potential collaboration.

“Working with Eric on this project has been a privilege and a delight. Besides his brilliance as a composer and pianist, Eric is an insightful reader with a powerful relationship to poetry, and this, together with my own interest in the musical qualities of language, makes our collaboration very congenial.

“We have been lucky to work with a superb soprano in April Fredrick, too, both at the premiere performance and the recording of The Fetch song-cycle. Hearing my poems take on this other life in music has been an extraordinary and enriching experience, and the project has become a special one for all three of us.”

Eric graduated from the Advanced Performance Diploma programme in 2017. While at RBC, he was the winner of the Peter Donohoe Gold Medal (2016) and the John Ireland Piano Prize (2017). He is currently a doctorate candidate and a Tutor in Music at the University of Oxford’s Merton College.