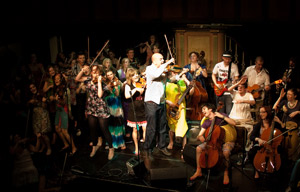 The Olympic Torch passes through Birmingham on Saturday 30th June and Sunday 1st July, with members of the public being invited to hear the ‘Song for Birmingham’ by the Conservatoire Folk Ensemble, which has been commissioned by Birmingham City Council.

Around 45 members strong, the Conservatoire Folk Ensemble performs a mixture of original folk-based and traditional music, arranged by director of the group, Joe Broughton.

“I was thrilled to hear that the Conservatoire Folk Ensemble had been commissioned to write the Olympic Torch song for Birmingham. The piece is a modern day folk song which we’ll be performing across Birmingham whilst the Olympic Torch is in the city”, said Joe.

The first performance of ‘Song for Birmingham’ will be at a special concert at Adrian Boult Hall, Birmingham Conservatoire, on the evening of Friday 29th June, ahead of the Olympic Torch arriving in Birmingham the next day.

For full details on all ‘Song for Birmingham’ performances and Olympic Torch celebrations in Birmingham, visit www.birminghamourgames.co.uk