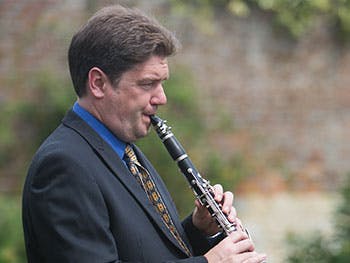 “The students appear to be enjoying it immensely and gaining a lot of insight into playing 'another' instrument. A lot of them have already got passable second study woodwind instruments such as Oboe and Saxophone," says Paul.

Paul has been a consultant at Birmingham Conservatoire for a couple of years, but is starting this new elective module now for the school. Paul is not just a consultant for the school, he is also an established West End musician who has performed in such West End shows as Les Miserables, Billy Elliot and Guys and Dolls.

The Woodwind Elective module hopes to introduce students to the requirements that contemporary multi-instrumentalists must meet to cope with the demands of current orchestrations. The old notion of doublers being held in low regard is fast becoming obsolete, as to play today's music, a professional level of playing is required on anything up to five instruments.

A quick look at the woodwind chairs in any West End pit will reveal not flute, oboe, clarinet and bassoon players but players tackling saxophone, doubling any or all of the above.

Orchestrators of musicals have long known that by using doublers, more can be achieved for less money. But, as the standard of these players have improved, they are now frequently utilised in professional orchestras, opera and ballet companies.

As explained by Paul, perhaps the prime reason for designing this elective is to instil into today's young woodwind player that a knowledge of the other instruments in their family will help them gain all kinds of work. Teaching posts are often woodwind posts as opposed to specialised instrumental posts as it is now expected that potential employees will have another string to their bow. If they don't, someone else will.

The elective will provide a 'safe zone' for players to learn new instruments and benefit from group teaching. All the first study players pitch in and help the second, so classes can easily become a noisy affair.

“The business side of being a self-employed musician in today's climate is never far from my mind and where possible, I give tips on music related topics such as pit etiquette, finances and (perhaps the most pertinent) the do's and don'ts of doing a sit-in and contacting professional players" says Paul.

"Throw in advice on mouthpieces and gear alongside advice on playing in the different styles that are required and this elective is now a valuable and enjoyable addition for the woodwind faculty,” explains Paul.