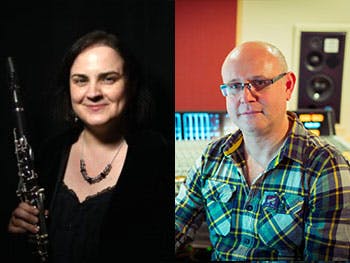 The Royal Birmingham Conservatoire has appointed two Interim Vice Principals (Music) who will each take on part of that portfolio from November 1 for the coming months.

Luan Shaw will be focusing on oversight of Learning and Teaching, and Dr Simon Hall will be taking the reins on Operations. The arrangements for backfilling their current roles will be worked out over the next few weeks.

Royal Birmingham Conservatoire Interim Principal Dr Shirley Thompson said: “Huge congratulations to Luan and Simon. I am really excited about working with them in this new capacity.”

Luan’s association with Royal Birmingham Conservatoire spans some 30 years and during that time she has experienced learning and teaching at RBC from almost every conceivable angle, including as a student herself. Her numerous roles have ranged from Head of Woodwind and Brass in the Junior Department to Director of Postgraduate Studies and the Conservatoire’s first Head of Pedagogy, from 2011-19.

All aspects of Luan’s work at RBC are informed and enriched by her portfolio background as a professional performer and classical music practitioner, and she has accrued over 25 years’ experience as a professional clarinettist, instrumental teacher, music workshop facilitator, examiner and adjudicator. Highlights have included touring with the European Union Youth Orchestra, performing with the City of Birmingham Symphony Orchestra under the baton of Simon Rattle, Sakari Oramo and Andris Nelsons, twelve seasons as principal clarinet with Longborough Festival Opera, and thirteen years as co-principal clarinet with Orchestra of the Swan.

Simon has worked at Royal Birmingham Conservatoire since 2001. He was appointed initially as a lecturer, to develop the fledgling cross-faculty BSc (Hons) Music Technology course, which has gone on to become one of the most successful and long-running cross-faculty degrees in the University. He became Head of Music Technology at RBC in 2013 and leads a department that combines teaching with research and technical provision.

Throughout his career, Simon has always maintained very wide musical interests. He is active professionally as a practising composer, music producer, recording engineer, bass trombone player, and researcher, as well as educator.

Simon and Luan hope to be able to bring their wide-ranging experiences to successfully inform these interim roles, and are very much looking forward to working with RBC and University colleagues in a new capacity.