, the second recording by the Choir under the direction of one of the UK’s most distinguished choral directors, Paul Spicer, will be released for sale on Monday June 27th. The disc received a glowing five star review in the July/August 2011 issue of Choir and Organ (see below).

The repertoire is music by leading British composers Kenneth Leighton and James MacMillan and was recorded in St Alban’s, Highgate, Birmingham during May 2010. Among others, the CD features soprano soloist Amy Secretan, who has an ‘amazing voice’ according to broadcaster and singer, Aled Jones; and organist David Saint, who is Acting Principal of the Conservatoire – which is part of Birmingham City University.

Paul Spicer studied with Herbert Howells and Richard Popplewell (organ) at the Royal College of Music. As well as being a composer, biographer and organist, Paul is one of the UK’s foremost choral directors; his work is well-known, partly through the many CDs he made with the Finzi Singers for Chandos Records. He now teaches choral conducting at Birmingham Conservatoire, where he also directs the Chamber Choir, and at Oxford University.

James MacMillan studied composition with Kenneth Leighton at Edinburgh University and, despite their different sounds, their music has much in common. The performances given by the Conservatoire’s critically-acclaimed young choir explore two very different, but complementary and accessible, musical ‘languages’.

Composer James MacMillan said: “I am flattered and delighted to be the focus of this new disc by this exceptional young choir from Birmingham Conservatoire. I was present at some of the recording sessions and was astounded at how high the performance standards were. Paul Spicer’s direction was insightful and expert, and his young singers responded with great maturity and skill. The results are plain to hear. I have been truly well served by these recordings. I am sure my old teacher Kenneth Leighton would have been equally appreciative.”

Invocation is Birmingham Conservatoire Chamber Choir’s second recording on the Regent Records label under Paul Spicer’s direction and is distributed by RSK Entertainment Ltd. The first was To Music – a collection of English 20th Century choral music. Invocation is on sale through the Birmingham City University online store where it is available to hear before release.

The Chamber Choir’s next recording under Paul Spicer will be a disc of partsongs by John Ireland and Frederic Delius. Recording will take place early in July 2011 in St Alban’s, Highgate, Birmingham. Supported by the Delius and Ireland Trusts and recorded for the SOMM label, the CD will be the first recorded presentation of John Ireland's partsongs as a body of repertoire and will revive Delius’ partsongs. 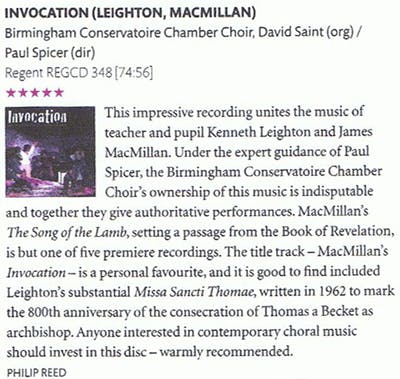