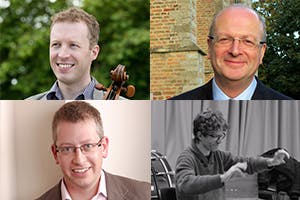 RBC is delighted to welcome Ed Puddick, who has recently taken up the mantle of Lecturer in Jazz. Ed is an award-winning jazz arranger, composer and an alumnus who has taught jazz composition and arranging at the Guildhall School of Music and Drama, as well as teaching for the Conservatoire since 2017. He has written for the BBC Concert Orchestra, Sydney Jazz Orchestra, London Jazz Orchestra and National Youth Jazz Orchestra (NYJO), among others. He is also an active member of the Ivors Academy, serving on its Jazz Committee.

RBC also looks forward to welcoming Tim Smedley, who will lead Chamber Music provision across RBC from 1 September. Tim is a cellist and teacher with performance experience on both modern and period instruments. He has worked with many of the country's leading orchestras and ensembles and has also maintained an extensive teaching career. Tim joins RBC as Lecturer in Chamber Music, from his current position as Head of Strings at King's College School, Wimbledon, and he also teaches cello at the universities of York and Sheffield.

At the end of term, RBC will say a fond farewell to Visiting Lecturer in Choral Conducting Paul Spicer, who has made an outstanding contribution to choral activity at RBC over the past two decades and will be missed by staff and students alike.

Paul said: “I am very sad to leave RBC after many years of teaching choral conducting and directing the Chamber Choir. It has been a hugely important part of my life, and the ten recordings the Chamber Choir has made during these years stand as testimony to the wonderfully committed and talented students who have sung in it over the years. I hope it will go from strength to strength in the years to come.”

Paul will be handing over the baton to Julian Wilkins, a versatile, dynamic and inspiring conductor and teacher who is well known for his work with the choruses of the City of Birmingham Symphony Orchestra, as well as his teaching and conducting activities at the University of Birmingham. Julian is thrilled and honoured to be taking over from Paul and we very much look forward to working with him from September.