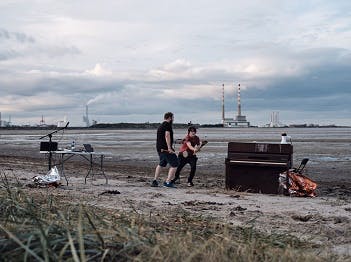 Senior Lecturer in music Seán Clancy and Research Assistant Andy Ingamells will perform a six-hour, evolving adaptation of their 45-minute piece ‘This Is About’, about the ancient Irish sport of hurling, on Saturday 14 August.

Seán is Irish but can’t play hurling, while Andy is a recent English immigrant to Ireland who took up hurling as a way to integrate. Seán recently became a father and hoped to learn hurling, so that he could play together with his son in the future.

As musicians, Andy and Seán wanted to find a distinctly musical way to approach the game. During the piece, the two performers struggle to overcome their lack of hurling skills, while an emerging spoken narrative interspersed at key points shares the struggle against their demons as they adapt to the changing circumstances in their lives.

Seán and Andy had planned to tour ‘This is About’ around Wales, Ireland and England during 2020, but weren’t able to due to the series of lockdowns. Instead the piece was filmed on a beach in Dublin Bay, and they will improvise a live, ever-changing six-hour accompaniment to the looped video on Saturday 14 August.

Listeners are welcome to dip in and out of the livestream performance, which will feature musical interventions from London-based composer and performer Francesca Fargion and RBC alumna Anna Palmer.

The livestream will be hosted by Birmingham venue Centrala.