Music-making for the deaf 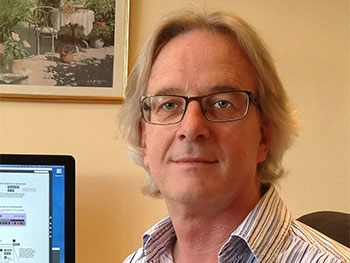 A Birmingham (UK) researcher is exploring new ways to enhance the experience of deaf musicians with new visual and touch techniques.

Richard Burn – currently studying a PhD in Music Technology at Birmingham City University’s Integra Lab – hopes his research will give deaf people a greater opportunity to express themselves and help enable them to create new works for both deaf and hearing audiences to enjoy.

Deaf musicians tend to favour acoustic instruments – quite often percussion –which produce a distinct physical feedback from vibration generated by the instrument, alongside more subtle visual clues. However, using electronic instruments, they often find it more difficult to resolve some of the characteristics of sound, such as pitch and harmonics.

Richard proposes the creation of a new musical interface that will combine haptic and visual forms of feedback to create a more inclusive experience for deaf people. Alongside vibrations, visual indictors will appear on a digital display that collectively form a ‘sonic fingerprint’ when an instrument is played, highlighting different components that make up the sound.

Traditional waveform representations are unable to truly describe what music actually sounds like. There are much more subtle characteristics of sound that may be better represented visually, for example, by using simple shapes and symbols to describe harmonic content.

Having spent 35 years in the Royal Air Force, Richard decided to pursue his long-standing interest in music technology. While studying for an MSc, he did some work on visual feedback – using light and colour to enhance musical performance. He decided to study this in more depth for his PhD, but with a particular focus on the needs of deaf musicians

“I will be conducting a range of interviews and surveys in order to understand what type of feedback would be useful to deaf musicians. The second stage will be developing systems that deliver those feedback loops and then the third phase will be testing the systems that I’ve developed to see whether they fit the project’s initial aims.”

Funding for Richard’s PhD thesis has come via the Midlands3Cities Doctoral Training Partnership (DTP). The scheme, a collaboration between six Midlands universities, provides research candidates with cross-institutional mentoring, expert supervision, subject-specific and generic training, and professional support in preparing for a career.

“The funding from Midlands3Cities gives me a unique opportunity to look at a subject that I’m interested in in real depth, but from a slightly different angle and with the potential for real world impact.

“I’m certainly looking to broaden my knowledge of musical interfaces, but there’s also a lot to do with human-computer interaction for me to consider as well. Birmingham City University’s Integra Lab provides the perfect environment to do this.”