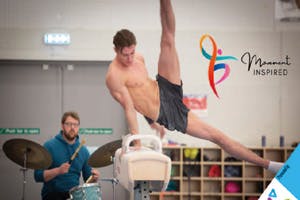 Director Sam Lockyer of independent production company Iconic Productions has created Movement Inspired, eight short films that bring together gymnasts and musicians from across the West Midlands to show how gymnastic movements can inspire jazz improvisation and composition as part of the Birmingham 2022 Festival.

The soundtracks for the films have been composed by lecturer in Music, composer, arranger and bandleader Ed Puddick.

The films were premiered on 30 July at the Electric Cinema as part of the Birmingham 2022 Festival and will also be shown next month at the following locations:

"We are hoping to take the films to a wider audience, with the potential of them also having an online home. The gymnastics World Championships are being held in Liverpool later this year, so we are hoping the films can be shown there too."